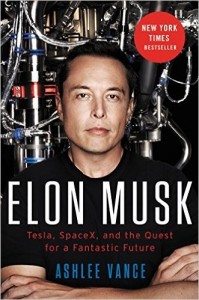 One of the tidbits in Ashlee Vance’s much-talked about Elon Musk biography is that the Musk brothers conceived of, and quickly rejected, an idea that would have put them at the forefront of the digital health space way back in 1994. According to Vance, as they roadtripped to the Mojave Desert from San Francisco, Elon Musk and his brother Kimbal discussed starting a social network for doctors as their first startup.

“The best idea to arise from the journey was an online network for doctors,” Vance writes. “This wasn’t meant to be something as ambitious as electronic health records but more of a system for physicians to exchange health information and collaborate.”

Although it was “the best idea” it wasn’t good enough to get off the ground, apparently. Kimbal told Vance he “went to work on a business plan and the sales and marketing side of it later, but it didn’t fly. We didn’t love it.”

It would be interesting to learn more about why Elon Musk, the CEO of SpaceX and Tesla Motors and one of Silicon Valley’s most notable innovators, “didn’t love” the potential foray into digital health. It may have been prophetic, given that the “doctor social network” has been tried a number of times since, with decidedly mixed results.

The bottom of the barrel is another pair of brothers, Richard and Albert Amini, who pitched a doctor social network called Rolodoc on Shark Tank in 2013 and gave “the worst pitch ever” according to Mark Cuban. Cuban knows what he’s talking about — the man has a few mobile health investments under his belt.

But more serious contenders have also had their troubles. One of the best known, Sermo, an anonymous doctor social network, laid off a large chunk of its workforce in 2009 and tried out some different business models in an effort to make the service profitable. In 2012, Sermowas acquired by WorldOne, a healthcare insights company, but the newly-merged entity changed its name to Sermo. It now boasts around 500,000 doctor users, but serves as somewhere between a social network and a crowdsourced research platform.

Doximity is another well-known healthcare social network, which has found success by being more of a LinkedIn than a Facebook, as a 2014 Inc story has it. Doximity claims 400,000 physician users in the US and raised $54 million last spring.

“Doximity seems to have learned a lesson from the less successful physician social networks that came before it, some of which pursued a business model which provided a marketing channel for drug companies and medical device manufacturers,” Inc wrote.

Other recent “doctor social network” upstarts that have managed to convince investors of their promise, in any case, tend to hang their hats on the crowdsourcing angle, creating tools that help physicians collaborate on clinical decisions and medical conundrums. SharePractice, which lets physicians evaluate and comment on different treatments that clinicians suggest to their patients,raised $1.3 million last year. Figure 1, the “instagram for doctors” that lets physicians weigh in on each other’s medical images, raised $5 million last month.

Even WebMD is seeing the appeal of this sort of app. It recently launched Medscape Consult, which according to CEO David Schlanger, is “going to allow doctors to do something they haven’t been able to do before, and that’s really crowdsource clinical questions to their medical colleagues and really rely on the community of physicians to help them answer questions.”

At the risk of giving the tech mogul too much credit, it seems like the Musk brothers did identify a problem worth solving: a social network that helped physicians exchange health information and collaborate. They also correctly surmised that 1994 was not the best time to launch such a venture.