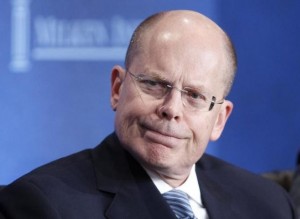 UnitedHealth will examine each product and region where it sells individual plans on the exchanges during the first half of 2016 and decide where to exit, CEO Stephen Hemsley said. The company has about 500,000 customers on the exchanges, which were created under the Affordable Care Act.

The insurer announced in November that its losses on the exchanges were unsustainable and it might drop out of the Obamacare exchange business. Tuesday’s comments indicated a measured approach where the company may decide to retain some geographical regions and types of insurance plans.

UnitedHealth will approach the exchanges “more slowly and thoughtfully and selectively,” Hemsley said during the company’s annual meeting with investors.

Enrollment on the exchanges is about 9 million this year and is expected to grow to 10 million next year, half the size of earlier estimates. Insurers have said that weak enrollment and high medical costs have taken their toll on profits, but only UnitedHealth has said it might drop out in 2017.

If UnitedHealth and others depart the exchanges, the reduced competition could boost premiums. Any deterioration of the exchanges in the midst of the campaign for the November 2016 could give ammunition to Republican candidates opposed to the health care law.

In November, UnitedHealth’s news surprised investors, and pulled down shares of UnitedHealth and competitors on the exchanges, including Aetna and Anthem.

Hemsley said it was not yet known if the exchange problems reflected a structural issue with the exchanges or UnitedHealth issues. The company tried to keep costs down by selling plans with small doctor networks, and priced competitively, he said. It also signed up members with better health than the overall exchange population, but it still lost money, he said.

Under the law, insurers cannot refuse coverage to anyone, and many insurers including Aetna and Anthem have said some members are using medical services heavily, contributing to losses. Members enroll starting in November, but can also pick up coverage during the year based on life changes, like losing a job, and UnitedHealth said those members were the most costly.

Hemsley said the company had formed its view of the issues based on its own business, but indications were that other insurers in the marketplace were seeing similar dynamics. He told investors that in order to stabilize, the market needs a bigger, more stable pool of enrollees.

Hemsley said a pullback now does not mean it will permanently exit the exchanges. UnitedHealth largely withdrew from government-paid insurance markets including Medicare Advantage and Medicaid and then entered again, he said.