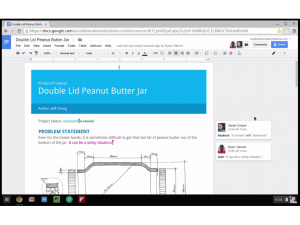 Google wants to take some of the stress out of working with Microsoft Office files in the Google Drive app suite. At Tuesday’s Google I/O keynote, the company announced native editing for Office documents, right from your mobile device or Google Drive.

It’s actually pretty simple: open a Microsoft Word document on your Android device, and you’ll be able to edit it and make changes without first converting it into a Google Doc. And when you’re done, all changes are saved to that original Word file — there’ll be no need to worry about file conflicts with folks who aren’t using Google apps. Google acquired Quickoffice back in 2012 with plans to bolster the Google Drive suite of editing apps, so it’s great to see these vital features finally being implemented.

Taking another page from the Microsoft Office playbook, Google Docs now offers improved support for tracking changes when you’re working collaboratively. Users can now make suggested edits that are highlighted, accepting and rejecting changes at will. If you’ve worked on a document in Google Docs with multiple people before, you’ve likely run into the hassle of trying to figure who made what changes along the way. This should make things a bit easier.

The company also announced mobile support for Google Slides, allowing you to create PowerPoint-esque presentations on your Android or iOS device.

There was also bit of news for companies who are considering ditching Microsoft Office for Google Drive. Google Drive for Work is a new premium option that offers file encryption for files transiting to and stored on Google servers, and document auditing and activity APIs to keep tabs on how employees are using Drive. Companies will get unlimited storage, paying $10 USD per user, per month (there’s no word on International pricing yet).