Apparently Google’s restructuring into “Alphabet” didn’t do very much to throw regulators off the giant company’s scent. 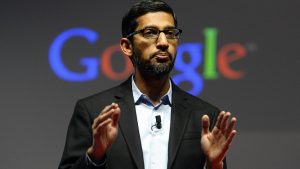 The U.S. is said to be pursuing an antitrust investigation into Google’s Android operating system due to concerns that Google is prioritizing its own proprietary applications — like Gmail and Google search — over others, according to reports from Bloomberg and Reuters, citing anonymous sources.

In particular, the Federal Trade Commission investigation centers on “whether Google is telling Android handset makers which Google apps they must show on their phones, and how and where they are displayed,” Reuters reports.

The investigation is reportedly in its early stages and may not result in a formal case.

Harry First, a law professor at New York University, characterized Google’s growing regulatory issues as “a minor to moderate pain in the ass” in an earlier interview with Mashable. “Defending anti-trust cases does take attention of top level management and it does cost money… They could be the subject of inquiry here, or in China, in Korea, in Japan. Google is all over the world and so is antitrust.”

The Android operating system launched in 2008, following close on the heels of Apple’s original iPhone launch. Android has since become the dominant smartphone operating system in the U.S. and much of the world. More to the point: it has become a cornerstone for Google’s high-stakes mission to dominate smaller screens in the way it has long dominated desktops. That mission is core to Google’s recent corporate restructuring and rebranding efforts.

By building up a popular operating system for other device manufacturers to use, and later a suite of Google-designed hardware devices, Google gave itself a powerful platform to promote its own search, email, entertainment and other services independent of the whims of Apple, Microsoft or BlackBerry. The regulatory investigation could prove to be a setback for those efforts.

The U.S. previously investigated Google for allegedly giving preference to its own search results over those of competitors, but dropped that probe in early 2013.

The European Union, which has been more combative in recent years with U.S. technology companies, is also investigating Google for potentially pressuring device makers and phone companies to give preference to its own applications with Android. The EU is also looking into whether Google is playing unfair with rival shopping sites in its search.