Ford is holding its annual developer conference in tandem with the TechCrunch Disrupt SF Hackathon this weekend and ahead of the event, the company announced an update to its Sync AppLink developer platform. 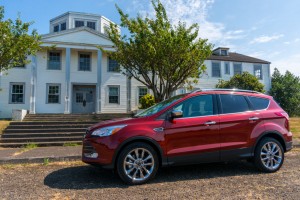 AppLink, which allows smartphone apps to connect to the car, now allows developers to make better use of Ford’s new SYNC 3 infotainment system. This means apps can now push in-vehicle notifications to both the car’s audio system and its displays, for example, and access some of the car’s sensors through AppLink. Apps will also now be able to use the car’s built-in microphones to receive voice controls.

The new Sync is a major step up from the old system in terms of usability, but it’s also the first time that Ford has brought together its AppLink technology and Ford MyTouch interface. It took Ford a while to bring this integrated system to market, given that Sync made its debut in 2007 and the MyFord Touch user interface launched in 2012, but AppLink wasn’t really integrated into those systems.

Ford says that more than 13,000 developers have registered for its developer program since it rolled out in 2013 and more than 24,000 software development kits have been downloaded. Sadly, that doesn’t mean that there are now thousands of compatible apps. Instead, there are only 90. Any way you look at it, that’s a massive gap.

Marchwicki acknowledged as much. “There is a clear gap between exploring and bringing it into the car,” he said and noted that the degree of testing and quality assurance necessary to allow apps in the car is one of the main reasons for the small number of apps available right now. “I don’t think developers who are developing for the automotive space are aware of our quality requirements.”

To rectify this, the company plans to ensure that developers have more realistic expectations when they develop for the car and understand that they have to make sure they exactly follow Ford’s quality guidelines. In addition, Marchwicki’s team is also looking at releasing a software emulator so developers can test their apps more easily.

Because it’s so hard to get apps into the car, Ford runs the risk that developers will simply develop for Android Auto and Apple’s CarPlay platform instead — both of which Ford says it will support in the future.

To counter this, Ford has recently open-sourced the AppLink platform and some other manufacturers, including Toyota, are now looking at support it. That would give developers a larger potential install base, but I think what developers really want is an easy way to integrate their apps with the car.