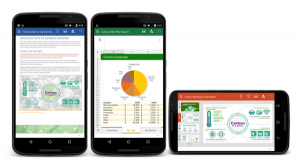 A few months after the launch of Office for Android tablets, Microsoft has announced a preview of “Office for Android phone”—a shrunken down version of the tablet app. The preview will eventually replace the existing Office Mobile.

For the most part, it looks like the Android tablet version. There’s finger-friendly versions of Word, Excel, and PowerPoint that let you create, open, and edit office documents. Best of all, the suite is free!

Saving is all done in the cloud, and the announcement notes that “OneDrive, OneDrive for Business, SharePoint, Dropbox, Google Drive, and Box” are all available.

Since the release is just a preview, Microsoft is using the built-in Android beta system. Signing up for the preview means heading over to Microsoft’s Google+ community(what strange times we live in) and opting into the preview app.