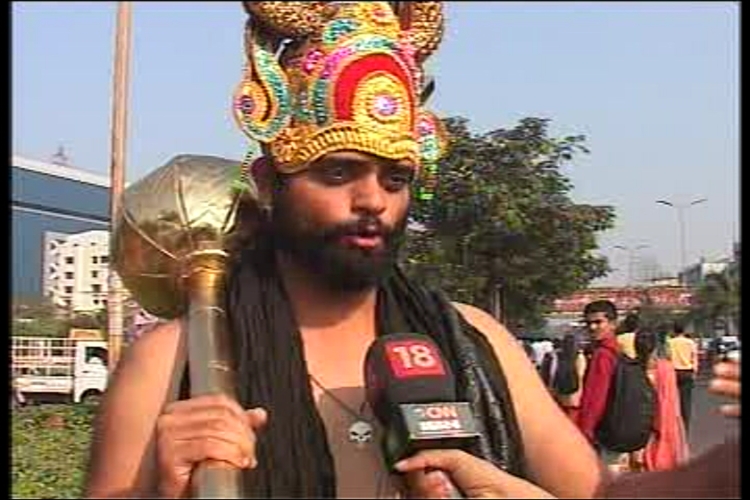 Chennai: Tamil Nadu holds the dubious distinction of having the most number of road accidents in the country. Over 15,000 people lost their lives in road accident in 2014. Keeping the deadly figures in mind, an NGO in Chennai has come up with a bold campaign that urges people to follow road safety rules.

A man dressed as Yama, the lord of death, walks along a busy traffic junction in Chennai with a hope to snatch his next victim — someone who hasn’t worn a helmet or who dangerously hangs from the footboard of a moving bus. Sabari Thozhan, who dresses up as Yama, aims to raise awareness on road safety and traffic rules through this simple but effective campaign.

Sabari said, “So we are scaring people that if they don’t wear the helmet or seatbelt, Yama is going to take your life. They see us and then they will realise that one day or another someone will have an accident here and our life is going to end.”

Every Thursday, Radhakrishanan and his team of volunteers take to the busiest traffic corridors in the city. Their goal is an accident-free nation. When the signal turns red Radhakrishnan grabs the attention of motorists by announcing the number of people killed on Chennai’s roads. Volunteers like Guna dressed in bandages educate people on the dos and don’ts of road safety.

Another volunteer Gunasekharan said, “If you give them a pamphlet or read about it then it’s not as effective. Even if you have a rule saying wear a helmet, not many people respect it. If you go up to someone like an injured person – people will at least listen to you.”

The focus of Thozhan’s campaigns has been on enforcing the helmet rule for two-wheelers, seat-belts for car passengers and raising awareness about the dangers of travelling on the footboard of buses. And while traffic rules are flouted by thousands across the city, these volunteers find the motivation to carry on.

Get top 10 stories like these delivered to your inbox weekly.