Highlights on this story:

A lot of traditional retailers will lose in the battle against Amazon, David Berman, founder of Durban Capital, said Friday on “Squawk Alley.” But Target and Best Buy seem safe for now.

“You are seeing outliers like Target and Best Buy,” Berman. “They were somewhat struggling, and they are suddenly doing a better job.”

Amazon has been gobbling up market share from traditional retailers recently, forcing them to enter pricing wars and invest in enhancing online offerings to better integrate their digital and brick-and-mortar businesses.

Target and Best Buy have both managed these integrations well by offering customers multiple ways to make purchases, such as ordering online and picking up in stores, and getting deliveries directly from warehouses. Ahead of Black Friday this year, both retailers offered deals online over the span of a few weeks.

Other retailers have struggled to embrace the changing market.

“It’s just going to carry on getting worse,” Berman said. ”[Amazon] is so big that, by the law of numbers, when they’re growing in the 20% range, you can imagine the market share they’re taking from everyone else.”

Berman said in recent years, people “got complacent” as the economy rose and retailers started to do better — but it was just a temporary phase.

“The mall apparel retailers are mostly all struggling,” Berman said. He added that as “good malls” like Westfield’s Garden State Plaza and Century City malls, will be fine, weaker malls will struggle. 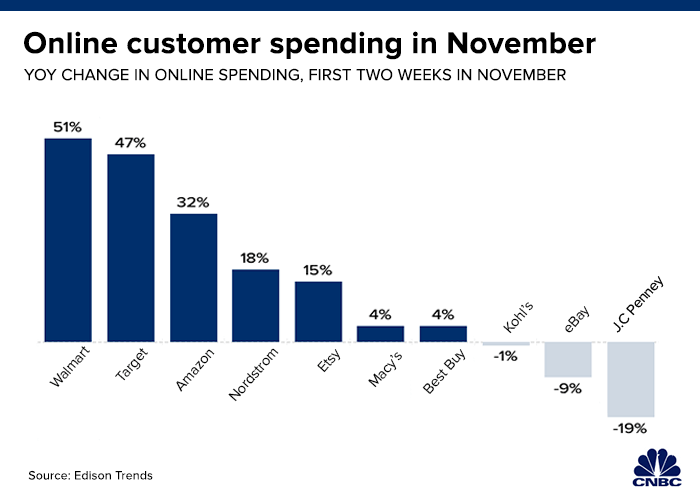 So what can struggling retailers such as Macy’s, Dillard’s and Kohl’s learn from stores such as Target, which has proven its apparel business is booming? Provide discounts, Berman said.

Mass and discount retailers were shoppers’ second-favorite holiday shopping destination, according to a survey of 3,485 consumers in September by NPD Group. E-commerce was the favorite spot.

But providing discounts is particularly hard for these struggling retailers because, while they may have decent cash flow, some also have a lot of debt, Berman said.

Target and Best Buy have also been successful when it comes to marketing and managing inventories.

“They have great inventories heading into Christmas,” Berman said of the two companies.

Walmart is also proving itself against Amazon.

According to surveys by First Insight, a retail analytics firm that collects data to help retailers make product decisions, 55% of consumers this year said they prefer to shop at Walmart versus Amazon. This is up from about 47% a year earlier.