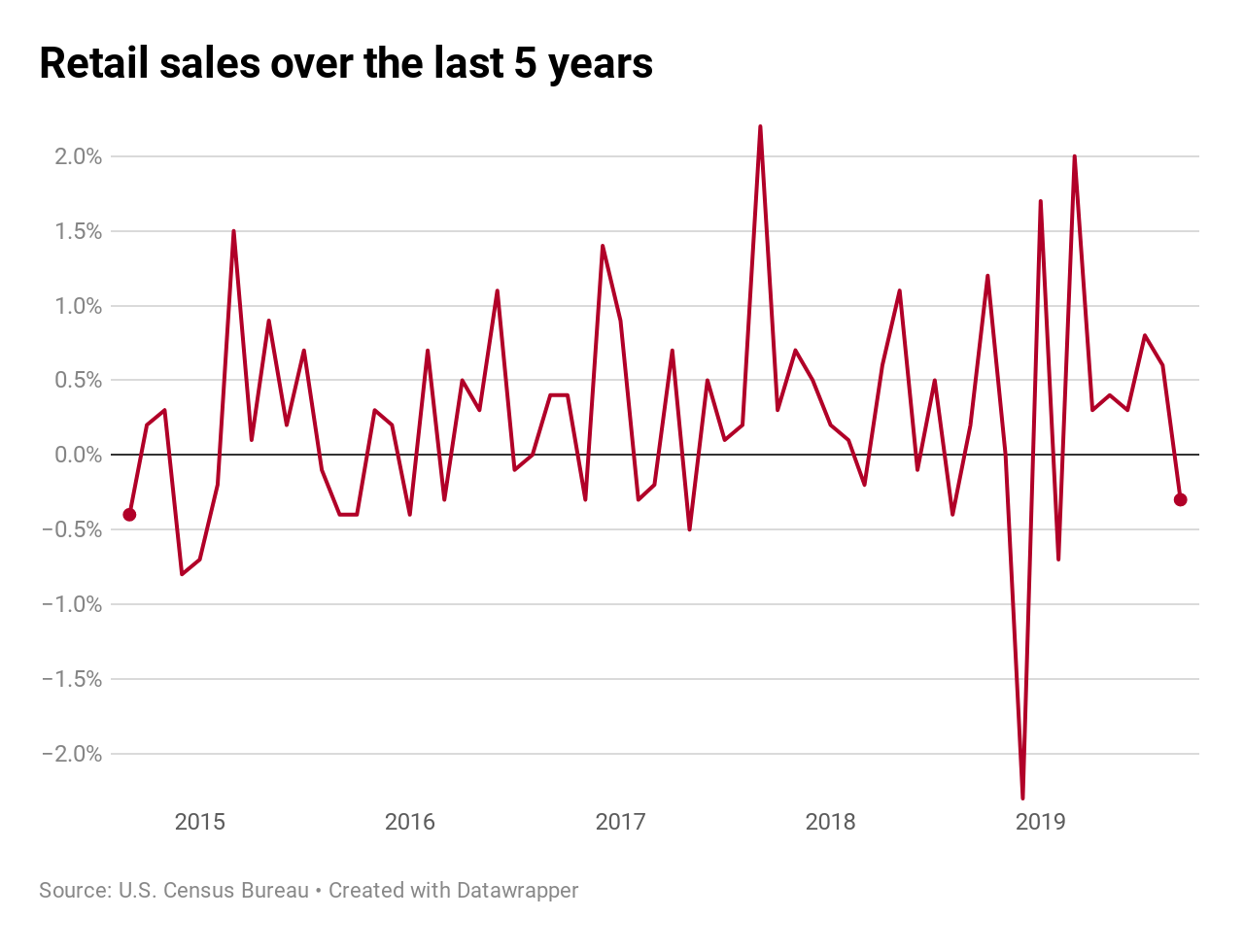 U.S. retail sales fell for the first time in seven months in September, raising fears that a slowdown in the American manufacturing sector could be starting to bleed into the consumer side of the economy.

The Commerce Department said Wednesday that retail sales dropped 0.3% last month as households slashed spending on building materials, online purchases and especially automobiles. The decline was the first since February.

Data for August was revised up to show retail sales gaining 0.6% instead of 0.4% as previously reported. Economists polled by Reuters had forecast retail sales would climb 0.3% in September. Compared with September of last year, retail sales increased 4.1%.

“While this is by no means conclusive evidence that the consumer is wavering (after all, the upward revisions reduce the impact of September’s declines), it nonetheless reinforces our ongoing concern that a spending retrenchment will ultimately trigger a more durable slowdown,” wrote Ian Lyngen, head of rates research at BMO Capital Markets.

Auto sales fell 0.9% in September, the most in eight months, while receipts at service stations fell 0.7% in what likely reflects cheaper gasoline.

Last month’s drop and August’s unedited gain in core sales hint at a marked slowdown in consumer spending in the third quarter that economists had been anticipating after a surge in the prior quarter. Consumption, which comprises about 66% of the U.S. GDP activity, increased at a 4.6% annualized rate in the second quarter, the most in 1½ years.

The strength of the U.S. consumer has also served as leverage for President Donald Trump, who’s touted the health of the American economy in the White House’s protracted trade war with China. Though Trump announced a temporary truce in the fight last Friday, economists say the longest economic expansion on record remained in danger without all import duties being rolled back.

“The drop back in retail sales in September was partly driven by a price-related fall back in gasoline prices, but the fact that underlying control group retail sales were unchanged provides another clear sign that consumption growth is slowing,” wrote Michael Pearce, senior U.S. economist at Capital Economics.

“We think real consumption rose by 2.5% annualised in the third quarter, down from 4.2% rise in the second, with overall GDP growth slowing to just 1.5% annualised, from 2.0%,” he added.

Receipts at clothing stores rose by 1.3%, according to the government’s report, while furniture sales climbed by 0.6%. Sales at restaurants and bars gained 0.2%.