In the battle for China’s massive food-delivery market, Alibaba is in the unfamiliar position of falling behind its rival. The behemoth that’s feeding more of the country’s hundreds of millions of hungry customers is Meituan Dianping.

Led by billionaire founder Wang Xing, Beijing-based Meituan recently solidified its share of the country’s $84 billion food delivery market at a record 65%, well ahead of Alibaba’s Ele.me at 27.4%, according to consultancy and data provider Trustdata. The company’s Hong Kong-listed shares have soared 80% this year after it reported a surprise profit in the second quarter. The stock defied the broader market decline in the city’s benchmark Hang Seng Index, which tumbled 9% since July amid ongoing anti-government protests in the city over the now suspended extradition bill. Wang, who derives the bulk of his fortune from his stake in Meituan, saw his net worth increase from $3.8 billion in the beginning of 2019 to $6.2 billion.

“A lot of people are now positive on Meituan, because they have proven that there is money to be made in the food delivery business,” says Wang Xiaoyan, a Shanghai-based analyst at 86 Research. “There will be fluctuations in its profitability margin, but it won’t bleed as much money as before.”

Meituan reported a net income of 877.4 million yuan ($124 million), compared with a 7.7 billion yuan loss a year ago. Revenue increased 51% to 22.7 billion yuan after it grabbed market share from rivals like Alibaba’s Ele.me and recorded one-time gains derived from investments in wealth management products.

The company’s results were attributed to its ability to provide better services and the effectiveness of its subsidy strategy. It’s been more aggressive than Alibaba in inking exclusive delivery partnerships with restaurants, while boosting delivery time and reducing costs by matching order data and grouping more deliveries in one trip. This has allowed users to stick to Meituan’s platform, even though Alibaba has tried to convince them to switch by doling out hundreds of millions of dollars in coupons and meal subsidies. David Dai, a Hong Kong-based analyst at Bernstein Research, says Meituan’s user loyalty is much stronger than Alibaba had initially expected.

“People may say that they are price sensitive, but not everyone would open two apps and compare prices before ordering a meal,” he says. “Meituan has more restaurants, more users and higher delivery efficiency, and this has formed a positive cycle.” 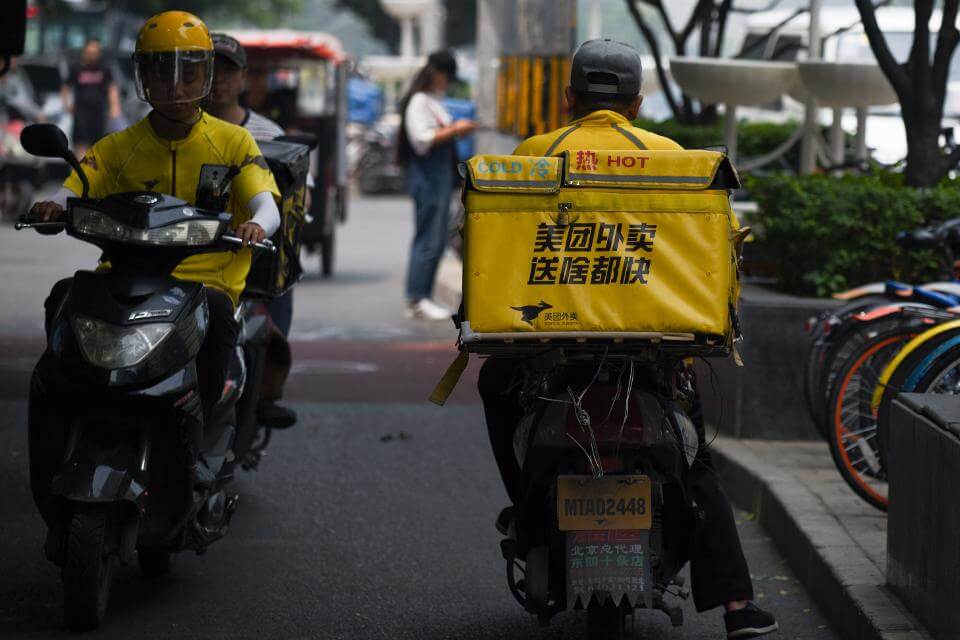 Now, in the face of reduced competition, Meituan is seeking to generate revenue from advertising on its platform, which boasts of 422.6 million annual active users. Restaurants can now pay to place banner ads, or have their offers displayed higher up in users’ search results.

Although Meituan’s market leadership will be hard to displace, Alibaba has already signaled that it won’t give up easily. Analysts say the e-commerce giant views food delivery as essential to its wider strategy, because it’s a high-frequency service that can be embedded in the Alibaba ecosystem to promote complimentary services like online payments. To chip away its rival’s dominance, Alibaba has been focusing on lower-tier cities, which are Meituan’s traditional strongholds.

“If Ele.me is determined to launch another price war, then Meituan has no choice but to follow up,” says Steven Zhu, a Shanghai-based analyst at research firm Pacific Epoch.

And this may well be the case towards year end, when the e-commerce giant launches its Singles Day shopping bonanza and uses discounts to attract shoppers. What’s more, Meituan may also have to pay more to couriers at that time, because cold weather in the winter season usually leads to increased delivery fees. Still, analysts say it has enough room for growth, which could lead to sustained margin improvements.

“Profitability improvement will come more from revenue growth instead of cost reductions,” says Bernstein Research’s Dai. “They can boost their take rate and improve advertising, and the space for revenue growth is still pretty big.”