Tucked away in a fulfillment center about an hour’s drive from New York City, Best Buy is using dozens of robots to sort through boxes of iPads, HP laptops, Beats by Dre headphones, DVDs, video games and more to ship to shoppers’ homes.

The thousands of bins overflowing with goods have traditionally been picked by hand, requiring the tedious work of Best Buy’s warehouse employees. An average worker could track more than seven miles by foot in a single day just searching for items. But new technology at three facilities in Los Angeles, Chicago and Piscataway, New Jersey, does the heavy lifting now.

There’s much talk about the shipping wars between big-box retailers Walmart and Target and e-commerce giant Amazon. But Best Buy has likewise been chipping away at its delivery strategy for the past few years. It started shipping online orders from stores in 2014. Now it has three modern warehouse facilities, known as “metro e-commerce centers,” up and running to help with the process. It should put the company in a more competitive position ahead of the 2019 holiday season.

“When Hubert Joly came in [as CEO], that’s when there was a leader that said: ‘OK, supply chain, let’s do this right,’” said Best Buy’s chief supply chain officer, Rob Bass, during a tour of the Piscataway warehouse.

Back in 2013, “we didn’t have some of the expertise that you need in a modern supply chain,” he said. “But once we got the team and the people set up, then you start to get to the technology side … which leads to what you see here today.” 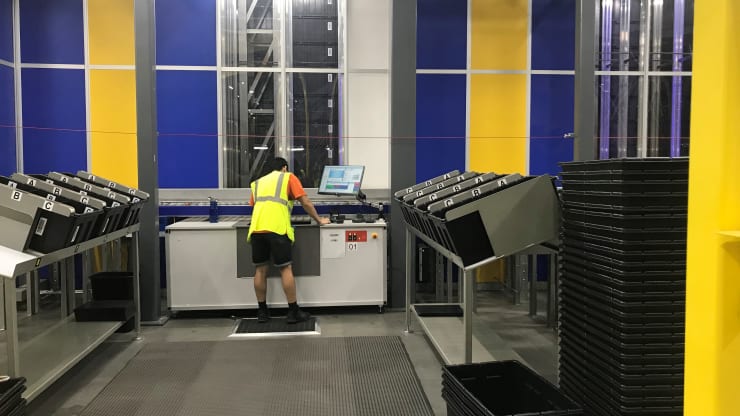 Much of this recent back-end work is thanks to Bass’ vision. He left Target’s supply chain division to join Best Buy in 2013. Before that, he was an airline pilot. And now, he’s spearheading Best Buy’s latest logistics push, having laid out a plan for Joly during his recruiting process that incorporated ways to get online orders to customers more quickly, reduce out-of-stocks in stores and even cut back on excess cardboard — an issue that’s proliferated in the industry with e-commerce’s ascent.

“It’s really easy to make the supply chain an afterthought and not give [it] the support it needs,” Bass said. “Hubert understood that. … He approved [my plan]. The board approved it.”

Joly stepped down as Best Buy CEO on June 11, handing the reins to Corie Barry, who was previously CFO. He remains executive chairman of the board. The two have said they plan to work closely together, with Barry continuing to chip away at the growth strategy Best Buy laid out at a 2017 investor day that includes key supply chain investments.

Best Buy hasn’t quantified exactly how much money it’s spending on logistics. But a spokesperson said the percentage of capital it has set aside for projects in fiscal 2019 and 2020 is at least two times what it’s used in the past. 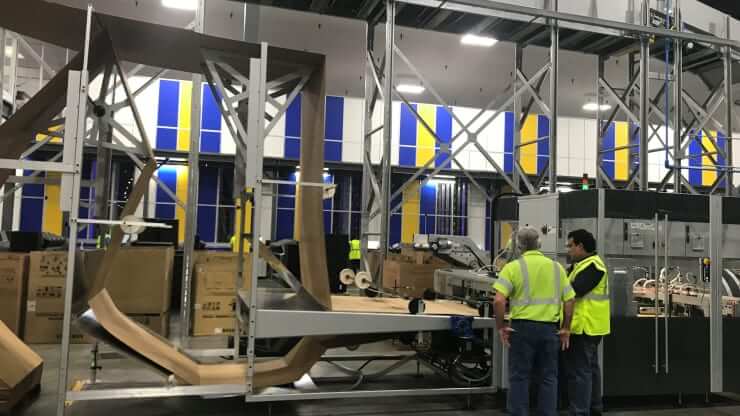 The metro e-commerce centers differ from the company’s six regional distribution centers for store fulfillment as they’re much closer to customers’ homes and are able to service next-day orders. They also help with delivering bulky appliances to shoppers’ houses — something Best Buy is doing on a daily basis with its massive appliance business, which accounted for 11% of its $8.48 billion in domestic sales in the first quarter.

A metro e-commerce center is about 50,000 square feet, compared with 750,000 for regional distribution centers. It keeps about 3,000 of Best Buy’s current best-selling items stocked there.

“Based on the product cycles, we work to put the right things in here,” Bass said, during the recent interview. “Today HP laptops are flying out the door because we have a sale going on.”

The three facilities set Best Buy up to reach 50 million people with free next-day delivery, the company said, giving customers the ability to make purchases as late as 8 p.m. and have the order shipped out that same day.

“These centers complement our regional [distribution centers] along with our stores,” Bass said. “There are other places around the country where this solution would be an overkill. … We are always looking at our sourcing algorithm to figure out the right mix.”

Best Buy has been making these investments as its business continues to grow, especially online.

Best Buy has also said that at any given time about 40% of its online orders are picked up at stores, which includes people using a curbside pickup option.

Best Buy recently ranked ninth in a list of companies with the most e-commerce market share in the U.S., according to eMarketer. It fell behind Amazon, eBay and Walmart. 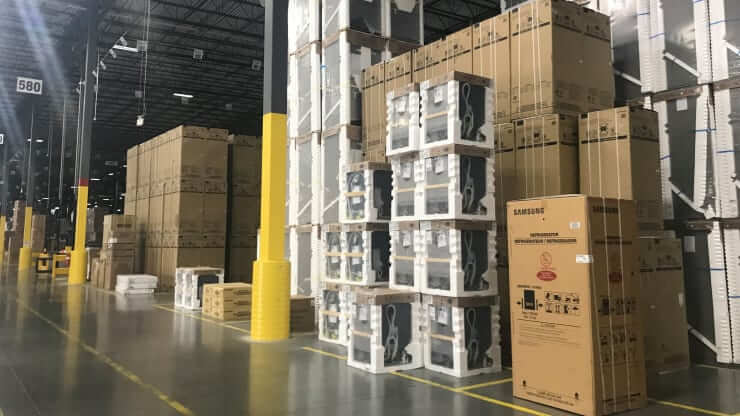 “Right now it seems to me [Best Buy] is farthest along in what I’ve called the holy grail of retail,” Moody’s retail analyst Charlie O’Shea said in an interview. “They have one pile of inventory in a distribution center both stocking stores and fulfilling online orders.”

“I think [it] will be one of the top performers this holiday, as it has been the past few,” he added. “I don’t see any reason for that to change.”

According to Bass, the company is thinking about where it will open additional metro e-commerce centers next. But those plans likely won’t solidify until after this holiday season is behind it.

“This is the time of year we all say: Let’s get really good at what we have in our current portfolio,” he said. “We will reevaluate next year.”

While it’s working on speed, Best Buy also has a solution for the mountains of cardboard that pile up thanks to a proliferation of people ordering things on the internet.

It’s using state-of-the-art machines at its three metro e-commerce centers, including in Piscataway, that precisely trim cardboard around items ranging from headphones to iPads and make boxes on the spot, fit to size. A machine can cut about 15 boxes every minute. 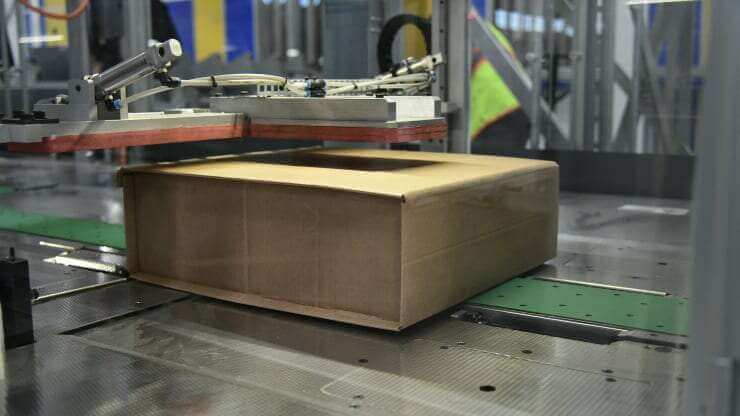 The result: boxes that don’t need extra “popcorn” or air bubbles, a roughly 40% reduction in cardboard waste and more space freed up in both Best Buy’s centers and on FedEx and UPS trucks.

“We shopped the world for this [technology], literally,” Bass said. “We are early adopters in this space. And now there are others saying: ‘What are you doing there?’ … It’s the right thing to do for the environment.”

Bass also said the slimmer boxes have given Best Buy some negotiating power with its carriers because it’s shipping less air. He said Best Buy is able to argue for better rates from its partners.

The cardboard-cutting machines build on a sustainability push Best Buy began in 2015. It encourages shoppers to recycle cardboard by posting messages on the outside of its boxes. Best Buy said its customers have recycled 2 billion pounds of electronics and appliances since 2009. Barron’s named Best Buy No. 1 on its list of the 100 most sustainable companies for 2019, up from third in 2018.

“We are achieving everything we hoped to achieve,” Bass said.

Best Buy is set to report quarterly earnings before the bell on Thursday. Analysts are expecting it will report a profit of 99 cents a share on sales of $9.56 billion, which would be an increase from its earnings of 91 cents per share on sales of $9.38 billion in the same period a year ago. Total same-store sales are forecast to climb 2.1%, based on Refinitiv data.

“There are a lot of folks out there that had these guys [declared] dead,” O’Shea said. “They are far from dead now.”