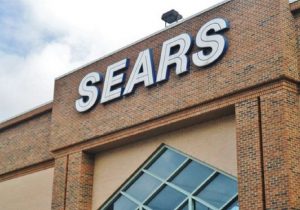 Hedge funds have been failing over the last year at the fastest rate since the financial crisis in 2008. Some crashed and burned after sudden reversals. Others quietly liquidated.

Then there’s Edward S. Lampert’s ESL Investments. It hasn’t failed, but may be setting a benchmark for slow, painful declines thanks to its outsize, long-term bet on two venerable retailers, Sears and Kmart.

Last week, Sears Holdings, the parent company, said what was becoming increasingly obvious to most investors, not to mention anyone who’s been in a Sears store lately: “Substantial doubt exists related to the company’s ability to continue as a going concern.”

Sears said that the statement reflected a new, more stringent accounting rule, and that the company was in no imminent danger of bankruptcy. “We are a viable business that can meet its financial and other obligations for the foreseeable future,” said Jason Hollar, Sears’s chief financial officer.

Still, coming after seven straight years of huge losses, the announcement seems a milestone on a road that has only one likely end.

“It takes a retailer like Sears a long time to die,” said Greg Melich, senior managing director and head of consumer research for Evercore, and the last Wall Street analyst still covering Sears. “It’s been burning through over a billion dollars in cash every year. That’s not sustainable.”

Sears Holdings has long been ESL’s largest investment, along with other Sears assets Mr. Lampert spun off, such as the struggling Lands’ End. (The two holdings accounted for nearly half the fund’s holdings at the end of the year, according to its most recent securities filings.) Sears Holdings shares were $162 in 2006; this week they were barely above $11.

Few hedge fund managers have been as celebrated as Mr. Lampert in his heyday, which now appears to be the mid-2000s. Mr. Lampert was a Wall Street wunderkind, a Goldman Sachs intern whose intellect, ingratiating personality and prodigious work ethic attracted the patronage of some of America’s most prominent and successful investors: Robert Rubin, Mr. Lampert’s mentor at Goldman; Richard Rainwater, who invested for the billionaire Bass brothers before starting his own firm; and David Geffen, the billionaire entertainment mogul.

Mr. Lampert was 25 years old and at the vanguard of the hedge fund movement when he founded ESL in 1988 with $28 million in seed money from Mr. Rainwater.

Just three years later, he was the subject of a front-page profile in The Wall Street Journal. He reaped even more publicity after he was kidnapped at gunpoint in 2003 and held hostage in a Days Inn before talking his way to freedom. By 2004, ESL’s spectacular 29 percent annualized returns landed him on the cover of Businessweek magazine.

Besides Mr. Rainwater and Mr. Geffen, his high-profile investors included Michael Dell, members of the Ziff publishing family and Thomas J. Tisch, a philanthropist and heir to the Tisch family fortune. In 2006, Forbes ranked him No. 67 on its list of the 400 richest Americans, with a net worth of $3.8 billion, a few notches ahead of another retailing executive, Jeff Bezos of Amazon. He was widely hailed as another Warren Buffett, only perhaps even smarter. “Eddie is one of the extraordinary investors of our age, if not the most extraordinary,” Mr. Tisch told Businessweek.

No one compares Mr. Lampert to Mr. Buffett anymore. His high-profile investors are, for the most part, long gone. Mr. Tisch, who’s also a director of Sears, is described as steadfastly loyal. Steven Mnuchin, Mr. Lampert’s roommate at Yale and now Treasury secretary, disclosed last year that he had a $26 million investment in ESL. (Mr. Mnuchin said he would divest the position.)

Notably, a group of Goldman Sachs clients who had invested $3.5 billion in 2007 bailed out of the fund in 2013. Their exit “pretty much says it all” as far as investor confidence in Mr. Lampert goes, Mr. Melich said.

Where did someone as smart, successful and hard-working as Mr. Lampert go wrong? His initial concept to combine two iconic but deeply distressed retailers — Kmart and Sears — initially appealed to many investors as a classic investment in undervalued, poorly managed assets in the Warren Buffett style. But Mr. Buffett doesn’t personally manage his portfolio companies. Several former Lampert investors told me that Mr. Lampert’s fundamental mistake was one common to many once-successful hedge fund managers: hubris, and the belief that investment prowess would translate into management skill.

“He was a very successful investor before he took over Kmart and Sears,” said Mark Cohen, former chief executive of Sears Canada and a professor at Columbia Business School, where he’s the director of retail studies. (Mr. Cohen left Sears Canada before Mr. Lampert arrived.)

“He seemed to think he was smarter than anyone in the retail business, but he had no idea how to run the company from Day 1,” Mr. Cohen said. “One thing I teach is that core competencies are the basis for success or failure. Lampert had no experience in retail, and no management competency whatsoever.”

Sears and other brick-and-mortar retail chains, of course, have been battered over the last decade by forces beyond Mr. Lampert’s control, especially the rise of internet retailing. Mr. Lampert claims to have foreseen the trend. If so, he’s had scant success carrying out a strategy to deal with it.

His one consistent approach over the years has been to cut costs drastically. Initially, it seemed to work, increasing cash flow and earnings. “There’s a philosophy to that,” Mr. Melich said, but Sears “grossly underinvested in areas that proved to be very relevant to the future of merchandising, such as multichannel retailing.”

He pointed to the contrast between Sears and Home Depot, whose shares have nearly tripled in the last five years, despite the internet and competition from Amazon.

Mr. Lampert has shown more prowess as a financial engineer, and has seemingly squeezed Sears’s once formidable assets for every penny of value through a continuing series of asset sales, spinoffs, dividend payouts and loans secured by Sears assets. Mr. Lampert has emphasized that because he is Sears’s largest shareholder, his interests are aligned with other Sears shareholders.

But the perception persists that many of these deals have benefited Mr. Lampert more than shareholders, since he’s often on both sides of the transactions.

Over the last two years alone, Mr. Lampert and ESL have extended Sears over $800 million in loans secured by Sears assets — nearly two-thirds as much as Sears’s entire market capitalization of $1.2 billion. That makes Mr. Lampert and ESL the largest Sears creditors, giving them vastly different interests than most shareholders. As creditors, they could end up owning Sears if it reorganizes in bankruptcy, while other Sears shareholders would be wiped out.

Last month, Mr. Lampert and the Sears board agreed to pay $40 million to settle a shareholder lawsuit claiming that Sears’s sale and lease-back of much of its most valuable real estate to a real estate investment trust — 43 percent owned by Mr. Lampert and his ESL hedge fund — was a blatant conflict of interest that harmed Sears shareholders. Sears has denied any wrongdoing and said it had settled the suit merely to avoid “protracted litigation.”

Mr. Lampert “has stripped Sears of its assets,” Mr. Cohen said. “It’s the longest liquidation in retail history. His reputation in the retail community is that he’s a financial pirate.”

Like most hedge fund managers, Mr. Lampert continues to get a management fee no matter how poorly the fund’s assets perform.

Still, Sears’s travails and their impact on ESL’s results have clearly taken a toll on Mr. Lampert’s own fortunes. Although Mr. Lampert probably shows substantial gains on his original investment in Sears and Kmart, “he and ESL investors can’t have fared very well over the past six or seven years,” Mr. Melich said.

Mr. Lampert remains one of the country’s richest people. He owns lavish homes in Greenwich, Conn.; Aspen, Colo.; and Miami as well as a 288-foot yacht, Fountainhead, named after the Ayn Rand novel (Mr. Lampert is a devotee of the author). Last year Forbes ranked him tied for No. 309 on its annual list of the 400 richest Americans, with a net worth of $2.3 billion.

But that’s a billion-and-a-half dollars less than Forbes estimated back in 2006. Since then, Mr. Bezos has vaulted to No. 2 on the Forbes list, just behind Bill Gates, with a net worth of $67 billion. Had Mr. Lampert simply put his fortune in a stock market index fund rather than gaining control of Sears and Kmart, he would have fared far better.

Even his critics concede that Mr. Lampert has been stubbornly consistent, refusing to throw in the towel on Sears even after years of deteriorating results. In a news release last week, he showed no signs of backing down, pledging yet another “fundamental restructuring” of Sears.

His strategy? Cutting “at least $1 billion in costs on an annualized basis.”