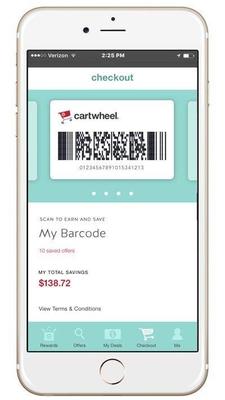 Target has introduced a way for in-store shoppers to rack up points from purchases through an experimental customer loyalty program.

Called “Cartwheel Perks,” the program is now being offered to people in the San Diego, Denver, Houston and St. Louis markets. Perks rewards Target shoppers with 10 points for every dollar spent in stores and is part of the retailer’s 3-year-old Cartwheel mobile app.

Downloaded more than 27 million times, Cartwheel is a deals-centric app that offers people hundreds of digital coupons that can be redeemed with a single mobile barcode scan at the register.

In a recently updated version of the app, users in test markets will find a Perks page that provides an overview of the new points-based program and lets them choose from different rewards say a pair of sunglasses, workout gear or laundry detergent when they accrue 5,000 points.

“We think of Cartwheel as a way of taking what, for many people, had been a process of clipping the paper coupon from a circular and bringing it the store, and integrating that experience into one digital, seamless app on your phone,” said Eddie Baeb, a spokesperson for Target.

But now, he said, the idea is to simultaneously appeal to coupon-driven and rewards-motivated shoppers.

Pilot cities were selected based on whether they were a strong or weak market in terms of existing app usage, as well as other factors. San Diego was chosen, in part, because the region ranks among the top five nationwide for active Cartwheel users.

For now, the Cartwheel app and its associated Perks program are only available to in-store shoppers but the company said it is considering linking online purchases with points as well.

Though Target did not disclose its plan for rolling out Perks to other areas, the test represents a noticeable shift for Target, which has never offered a points-based rewards program outside of a small test in Raleigh-Durham. There, the company trialed a separate mobile application called Red Perks, but those users will eventually be transitioned to Cartwheel Perks.

Ultimately, the plan is to get the Cartwheel app, which collects valuable data on customers’ buying preferences, into the hands of more people. The company would also like to personalize the offers its presents to every individual at some point.

Of course, there’s also this: Baeb said Cartwheel has found outsized favor with millennials, a bunch not often associated with coupon-clipping and that has no qualms about shopping online. Encouraging loyalty among this crowd seems key to bolstering sales in an increasingly challenging retail market, one where Amazon owns the ever-expanding realm of e-commerce.

Amazon captured $83 billion in e-commerce sales between July 2015 and July 2016, while it’s next closest rival, Wal-Mart, grabbed $13.6 billion during the same period, according to data from digital analytics firm eMarketer.