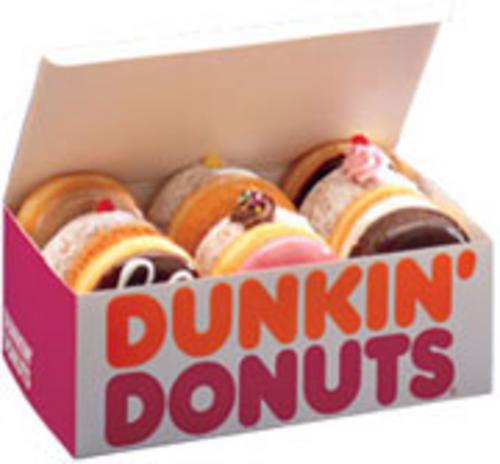 Dunkin’ Brands  (NASDAQ:DNKN), owner of Dunkin’ Donuts and Baskin’ Robbins, is very much trying to position itself in the U.S. consumer mind as a beverage company. Dunkin’ CFO Paul Carbone last week made it explicit, with his much-quoted quip at an investor conference: “We are a beverage company. Fred the Baker is not coming back.”

A grass-is-always-greener note: This is happening just as Starbucks is trying to position itself as a place to eat food, especially baked goods. Back to Dunkin’, yet again, we have a major household retail chain trying to overcome the retail-versus-perception challenge. In this case, though, Dunkin’ seems to have fared quite well in the reality part of that battle, but is struggling with perception. Carbone reported that beverages (mostly coffee and milk—but no one is going to drive to a Dunkin’ Donuts for a milk fix) already account for 58 percent of U.S. franchisee-reported sales in 2012.

Dunkin’s challenge is actually even tougher than getting Americans to think of the donut chain as a coffee chain. Dunkin’s presence has been very much an East Coast effort. As the chain moves West, it will battle the challenge of being the new kid on the donut block, with shoppers not used to going to Dunkin’ Donuts (other than East Coast transplants). That could be a good thing, too, as it won’t need to re-train shoppers how to think of Dunkin’. In that sense, it might be more difficult to train a New Yorker that Dunkin’ Donuts is for anything other donuts than to convince someone from California.

And training them is something that Dunkin’ is obsessed with. Carbone said Dunkin’ has been targeting California with its coffee ads since 2010, despite having no plans to open up shop there until 2015, reported Forbes. “By the time we’re in California, they’ll have seen five years of national media focused on beverages,” he said of the plan.

That’s pretty impressive. How many other marketers could convince their CFOs to run expensive TV ads (California is one of the nation’s most expensive TV markets) and other ads for a half-decade in a state where it has no stores? This is triply impressive when realizing that its e-commerce business is practically nil, other than selling some pre-packaged coffees, teas and t-shirts saying “Friends Don’t Let Friends Drink Starbucks.”

Dunkin’ knows that California is going to be an intense battle with Starbucks (NASDAQ:SBUX), which is already well-positioned with more than 2,000 stores. McDonald’s (NYSE:MCD) is the other key target. Both McDonald’s and Dunkin’ have been trying to undermine Starbucks, saying that Starbucks is overpriced and is too formal for most shoppers.

At a recent presentation to potential franchisees, Dunkin’ gave its intended “brand character” as “unpretentious, authentic, down-to-earth, humble, true-to-self, motivated and productive.” That seems squarely aimed at a chain that calls many of its associates baristas.

Compare that with McDonald’s, which is selling its 20-ounce coffee at $1, which comes to 5 cents/ounce. If Dunkin’ is pushing for the budget cup, it has some more cutting in store. As for coffee quality, well-publicized coffee taste tests between the three have alternated which one tastes best. (Unlike other products from the three, it’s hard to maintain strict quality coffee standards as the beans charge from batch to batch, even if all other elements—amount of water, temperature, brewing time, etc.—are identical.)

In the perception battle, it’s hard for Dunkin’ to avoid its brand. First, the emphasis on donuts is undeniable. Secondly, although the “dunkin'” part suggests dunking the donut in coffee, has anyone actually done that publicly in decades? But it’s more daunting perception challenge comes with the chain’s recent announcement that it is going to start selling gluten-free muffins and donuts later this year.

Therefore, at the same time that Dunkin’ Donuts is trying to convince people it’s really a beverage chain, it’s also trying to be seen as a health chain? Yeah, it’s really time to consider changing the name.