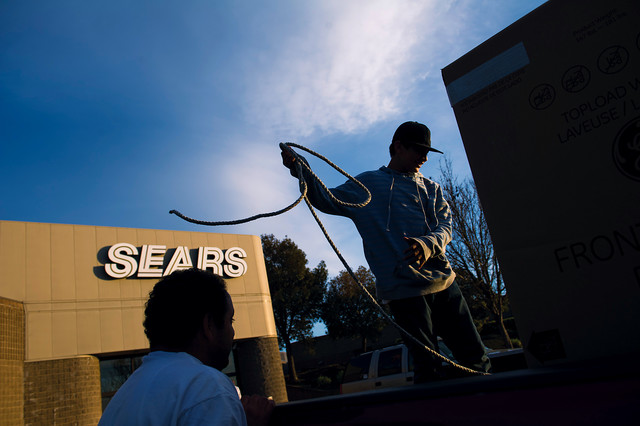 Sears Holdings Corp (SHLD). fell the most in six months after posting a $279 million first-quarter loss that Chairman and Chief Executive Officer Edward Lampert said he needs to reverse to transform the department-store chain.

The first-quarter loss of $2.63 a share compares with profit of $189 million, or $1.78, a year earlier, Hoffman Estates, Illinois-based Sears said yesterday in a statement. Revenue (SHLD) fell 8.8 percent to $8.45 billion.

Since last year, Sears has sold stores and spun off smaller-format locations to raise cash as Lampert focuses on the customer rewards program that now accounts for more than half of Sears’s sales. Lampert said Sears’s performance needs to improve so he can speed its transformation into a retailer focused on serving a base of loyal customers through more technology in stores and perhaps acquisitions that would help it improve offers and service.

“We could just move faster, we could take more risk,” Lampert said in a telephone interview yesterday. “If we make more money, we will do things that hopefully accelerate the transformation.”

The company said yesterday that it’s now evaluating options for its Protection Agreement warranty business, including a possible sale.

Lampert in February succeeded Lou D’Ambrosio as the company’s fifth CEO since he merged Sears Roebuck & Co. and Kmart Holdings Corp. eight years ago. D’Ambrosio cut inventory and debt and focused on analyzing data from the company’s loyalty-program customers. Still, D’Ambrosio wasn’t able to snap the streak of sales declines that has now reached 25 straight quarters.

Lampert, who already was chairman before becoming CEO, has long weathered criticism that he’s not a retail expert and that his talents lie elsewhere.

“There are a lot of brilliant retail guys who haven’t done particularly well, either,” he said. “It’s not that I’m unaware of that criticism, but I wouldn’t be in this position if I didn’t think that I could be successful.”

The company’s three-year-old rewards program, which Sears says has tens of millions of participants, is becoming increasingly important. Shop Your Way generated more than 60 percent of revenue at Sears domestic stores and Kmart locations, the company said yesterday.

Lampert said that portion will continue to grow.

He said he’d also like to expand the company’s Lands’ End clothing brand by taking it to new markets, perhaps through partnerships.

Lands’ End is “a jewel of the company that deserves to grow and deserves to become bigger and more important,” Lampert said.

While Sears hasn’t actively shopped the brand, it has received overtures, which the company won’t rule out, he said.

“If someone calls me up and says, ‘I’m interested in Lands’ End, I’m going to say, ‘OK, tell me what your interest is,’” Lampert said.

Lampert and his RBS Partners LP fund together held about 55 percent of the company’s shares as of April 30 and March 31, respectively, according to regulatory filings.