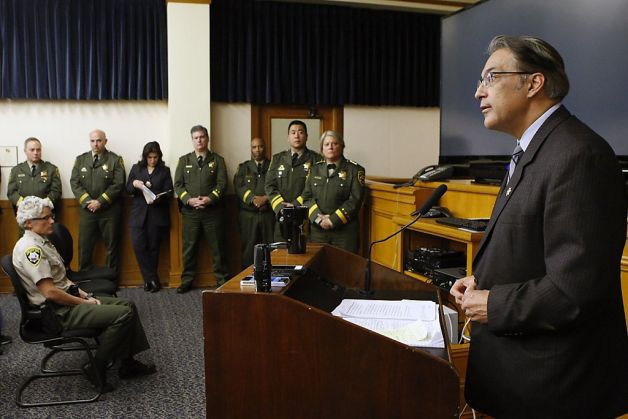 San Francisco General Hospital officials tried for three years to replace sheriff’s deputies and institutional police officers with what they hoped would be a less costly and more effective private security force – but at every turn, they hit a wall with the powerful Service Employees International Union and the labor-friendly Board of Supervisors.

Now, however, in the wake of Sheriff Ross Mirkarimi‘s admission that his deputies failed to search the locked stairwell where a missing patient was ultimately found dead, the privatization fight is certain to be revived at both San Francisco General and Laguna Honda Hospital.

Barbara Garcia, head of the city’s Public Health Department, said after Mirkarimi laid out his department’s failings that her agency was “exploring expanding our existing private security contracts” and looking for “long- and near-term solutions to ensure patient and staff safety.”

Records show that San Francisco General spent $6.5 million for sheriff’s security in fiscal 2012-13, a $1 million increase from four years earlier – for the same level of service.

For its part, the Sheriff’s Department says it’s stretched thin in trying to keep deputies 24/7 at San Francisco General.

At any one time, one-fourth of the 28 deputies and institutional officers on duty at the hospital are on overtime. Some deputies have generated annual OT checks in excess of $100,000.

Now, in light of the botched patient search, the Sheriff’s Department says it will add three deputies at the hospital immediately, with more on the way.

Complicating the current staffing are union rules that can block less-trained institutional officers from being transferred to other city sites without their say-so. There’s also the union-sanctioned system that lets deputies bid for assignments that rotate every five years.

Plus, under the sheriff’s rules, deputies can’t do certain jobs that that security forces might normally be expected to do – for instance, nurses can’t ask for their help to restrain an agitated patient.

Both Mayor Ed Lee and his predecessor, Gavin Newsom, proposed dumping the sheriff’s contract in favor of private guards at both San Francisco General and Laguna Honda, as well as at eight city clinics. The idea was to save $4 million a year.

None of the 51 sheriff’s workers at the sites would have lost a job. Instead, they would have been transferred to other city security posts.

SEIU Local 1021 – the politically powerful union that represents the institutional cops – managed to block it.

In fact, in 2011, as the Board of Supervisors was preparing to vote on the proposal, SEIU members staged an antiprivatization rally on the steps of City Hall – emceed by then-Supervisor and sheriff’s candidate Mirkarimi.

“For (those jobs) to be privatized is not an option,” union spokesman Carlos Rivera said.

Mirkarimi said that what his department needs is more money and equipment.

“I’m against privatization,” he said, “because we can provide service with excellence in the way San Franciscans would be proud.”

Black, white and sporty: The Oakland Police Department is getting a new look – trading in some of its more than 200 classic, black-and-white Ford Crown Victoria sedans in favor of a new fleet of souped-up, $70,000 sport utility vehicles.

Four have already been put on the road for testing, and eight others are being used for training.

As for what’s driving the changeover?

Ford, whose Crown Vics dominated the police-car market for years, stopped making them in 2011. Now the factory-modified Explorer is the vehicle of choice for a growing number of departments.

“They definitely get better gas mileage, and they are bigger,” said Kristine Shaff, spokeswoman for Oakland’s Public Works Department, which oversees the city’s fleet purchases.

All of the marked squad cars, some of which have already exceeded the department’s average seven-year life span, will eventually be replaced as well, budgets permitting.

Cash call: Mayor Ed Lee’s top angel investor, Ron Conway, is passing the hat – asking the 650 businesses that have joined his sf.citi tech-lobbying effort to start paying $500 a year in membership dues “to help us support our ever-growing” wish list.

In an e-mail pitch, Conway says the group’s goal is to “innovate” city policies “to ensure the tech sector is giving back to San Francisco.” Conway lists some of its recent efforts: passage of the Proposition E payroll tax reform last year, paying for new mobile technology for police, and working with schools to bolster tech education.

But not all members are diving for their checkbooks.

“Nothing I love more than having a billionaire ask me to donate $500 to his pet PAC,” groused one e-mail recipient.