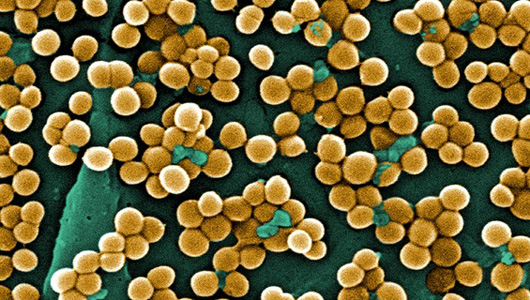 Methicillin-resistant Staphylococcus aureus (MRSA) infections have declined in recent years, with most of the decrease coming in hospital-acquired cases, researchers reported.

Possibly contributing to the persistence of community-acquired infections is the widespread use of antibiotics in livestock, selecting resistant strains that end up in manure used as fertilizer, which then can be a source of exposure to individuals living nearby, explained Brian S. Schwartz, MD, of Johns Hopkins, in a related article.

Both articles were published online in JAMA Internal Medicine.

“Methicillin-resistant Staphylococcus aureus continues to be one of the most common antimicrobial-resistant pathogens causing invasive infections, both in healthcare settings and in the community,” Dantes and colleagues observed.

However, the CDC’s Emerging Infections Program-Active Bacterial Core (EIP-ABC) surveillance program identified an annual decline of 11% in bloodstream infections among hospitalized patients between 2005 and 2008 in nine U.S. cities.

To see if that trend was continuing, and to examine rates in other settings, Dantes and colleagues analyzed EIP-ABC data to calculate national estimates.

Cases were defined as “hospital onset” when positive cultures were obtained after the third inpatient day, as “healthcare-associated community onset” (HACO) if cultured 3 days or less after hospital admission or the individual was an outpatient but had a risk factor such as being on dialysis, or “community associated” if no risk factors were present.

During 2011, there were 4,872 cases reported from the EIP-ABC sites, with 60% being classified as HACO, 20% being community-acquired, and the remainder being acquired in the hospital. The HACO numbers represented a drop of 27.7% from HACO numbers in 2005.

More than half of the patients were men, and median age was 61. A total of 41% had diabetes, and 21% had received dialysis during the previous year.

Manifestations included pneumonia, skin infections, and osteomyelitis. A total of 13% died, mostly within a week.

Among the HACO group, underlying conditions included diabetes in 47%, renal insufficiency in 43%, skin ulcers in 14%, stroke in 15%, and dementia in 13%.

Almost 80% had been hospitalized within the previous year.

For hospital-onset cases, 26% occurred in patients in intensive care, and the median time in the hospital prior to the infection was 1 week. All-cause mortality in this group was 21%.

The community-acquired cases tended to be in younger individuals, with the average age being 54, and while comorbid conditions were less common, there were higher numbers of smokers, IV drug users, and patients with HIV infection.

Using these EIP-ABC numbers and with adjustment for regional differences, the researchers estimated that there had been 48,353 HACO cases, 14,156 hospital-onset cases, and 16,560 community-acquired cases nationally. There were an estimated 11,285 deaths, with more than half being in the HACO group.

“The large decrease (54%) in hospital-onset invasive MRSA infections between 2005 and 2011 is highly encouraging and may be attributable to increased awareness and implementation of local and nationwide infection prevention measures in many healthcare settings,” Dantes and colleagues noted.