Declining birth rates and an aging population have impacted American migration patterns for decades. But according to the USDA’s Economic Research Service, between 2010 and 2017, almost 1,000 rural counties in the U.S. recorded more deaths than births. Add in migration patterns of people moving from rural areas of the country to more urban and suburban regions, and we find that in 2019 only 20% of Americans live in rural areas – which accounts for a surprising 97% of U.S. land mass.

But the implications of these population shifts greatly exceed the economic and housing needs of the region. Population change also means significant changes in health care need, demand and access. According to the National Institute for Health Care Management (NIHCM), “As urbanization increases, an older, sicker and poorer population remains in rural America.” What this really means is that those Americans living in rural areas of the country have much greater health issues, and far fewer health resources.

New infographics from NIHCM help tell the story of just significant these rural and urban variations can be. For example, not only are those living in rural regions on average 6 years older than their counterparts in urban areas, but they suffer from higher rates of obesity and diabetes. They are also more likely to live below the federal poverty line (FPL). 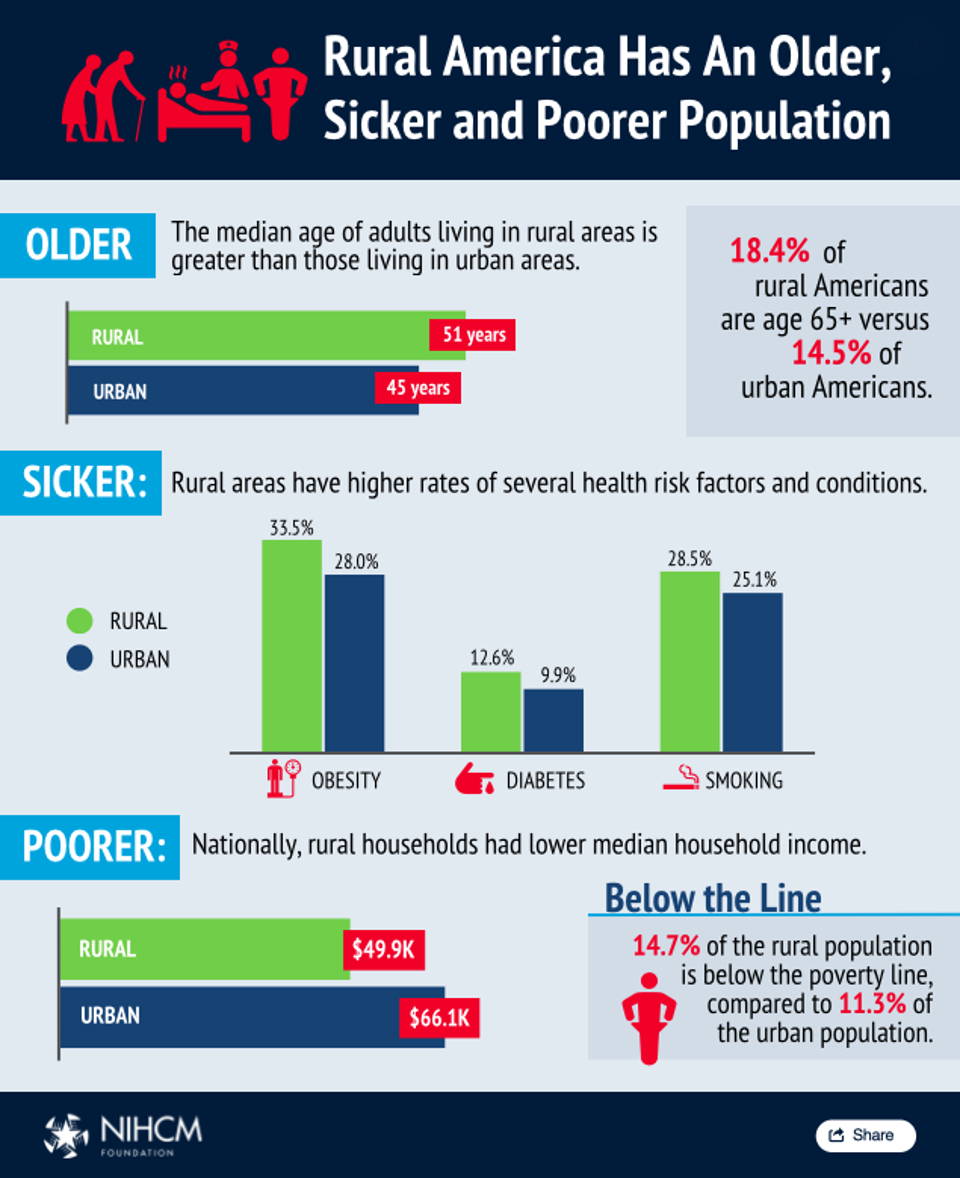 But that is only a part of the story. Rural regions of the United States additionally have fewer health care providers ranging from primary care physicians to OB-GYNs to dentists. There are, on average, 20 less physicians per 10,000 people in rural regions and only 5 primary care providers. Hospital closings have also taken a toll on these parts of the country, with 113 rural hospital closures occurring in less than a decade.

Dental care, which in children is often used as a predictor for overall health, is also lacking in these regions. In fact, Rural Health Information Hub uses a mapping system to allow individuals to look at the number of dentists available in their area, and indicates that there are almost twice as many practicing dentists in urban and suburban areas than rural areas. This discrepancy is likely to widen as individuals and families lose insurance, decreasing payments and thus access to dentists.

Maternity and specialty services are also declining in rural America. According to the National Rural Health Association, less than half (45%) of rural counties have obstetrician services – down from 54% in 2004 – highlighting a growing access problem for mothers and children. Even more troubling is that in 2008, only 6.4% of all OB-GYNs practiced in rural settings. Leaving a significant gap in prenatal and early childhood care. 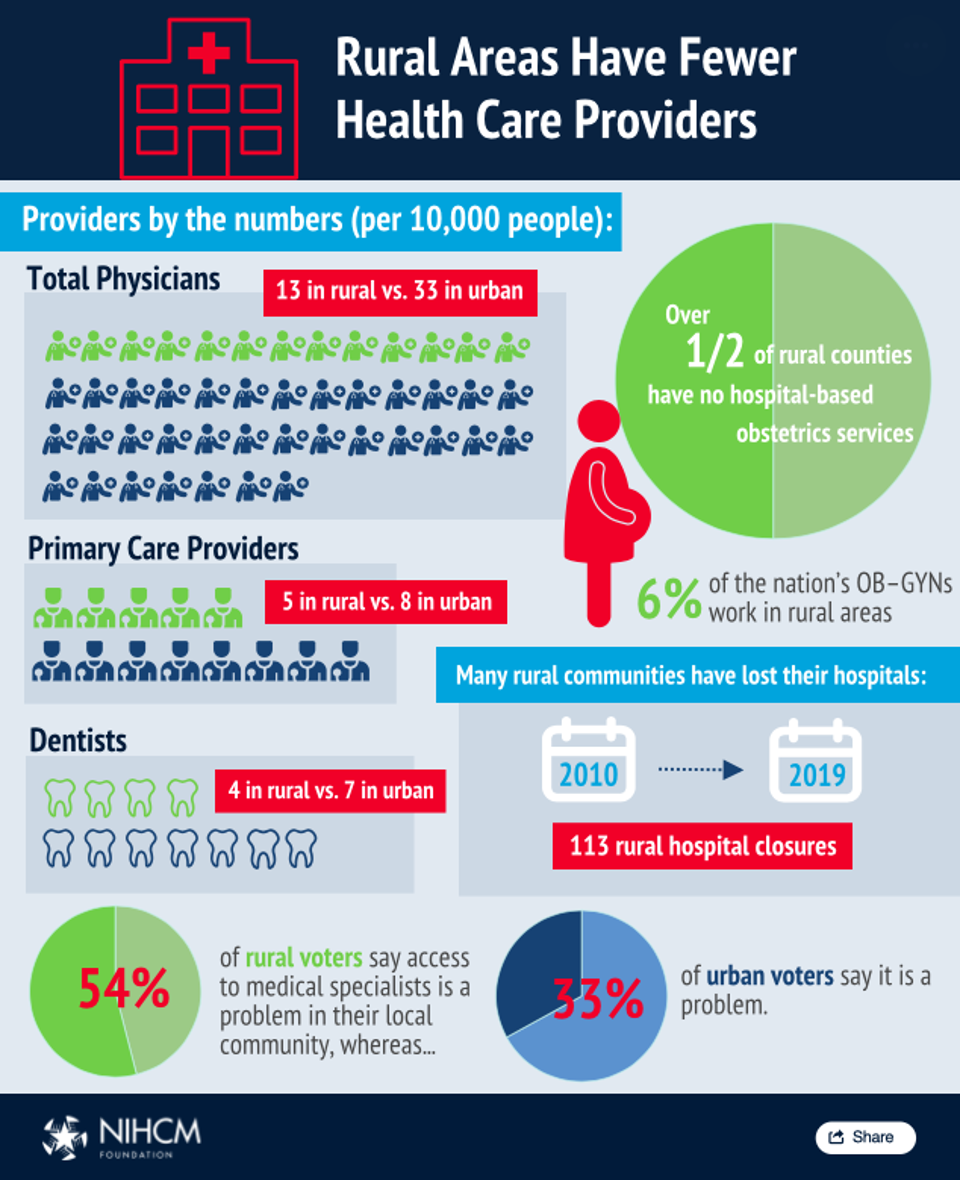 So what are Americans to do when access to basic medical care is growing ever more limited? There are a number of community strategies, policy changes and technological initiatives that are responding to the population and migration shifts taking place. First and foremost, increases in medical workforce will be necessary to meet the demand. But this goes beyond just hiring more people. It also means recognizing and utilizing alternative community providers such as pharmacists and EMTs. There is also a need to increase the residency slots and programs that exist in rural regions for medical students and physicians.

Telehealth is another means by which current medical providers can extend the scope of their work. For example, Robert Wood Johnson Foundation already contends that 25% of rural America uses telehealth in some capacity, so the possibility of expansion gives many hope. However, use of those technologies that mitigate many challenges distance produces face a number of hurdles including state-level laws that prohibit cross-state work and licensing for providers.

In other instances, those state lines prohibit patients from seeking care outside their state network. There are also technological challenges given that the FCC estimates 20 million Americans (most of whom live in rural areas) lack broadband access, indicating that the connectivity gap is large. And worse, that this gap between the haves and have nots could grow as technology advances.

What is clear from the new visuals created by the NIHCM is that the urban-rural divide in the U.S. is growing. And, without a number of complimentary efforts to offset the effects of population and migration shifts, the health of those in rural America will suffer.