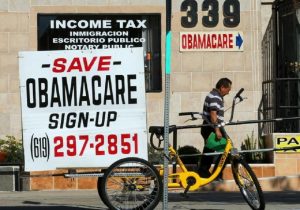 More than 9.2 million U.S. consumers signed up for health insurance using the Healthcare.gov website during the open enrollment period between November and Jan. 31, the U.S. government said on Friday.

Enrollment was down from 9.7 million a year ago but the decline was smaller than some had predicted amid President Donald Trump’s push to overturn former President Barack Obama’s signature healthcare reform under which the plans are sold.

With several insurers pulling out over rising costs, and Republican congressional efforts to scuttle the Affordable Care Act, known as Obamacare, the enrollment period was seen as a test of the program’s popularity. HealthCare.gov sells health insurance under the ACA for 39 states. The remaining states run their own exchanges. The total number of plan selections across all states for the entire open enrollment period will be released in March.

Average premiums for the second-lowest cost silver plan rose 25 percent compared with the previous year. At the same time the number of insurance providers choosing to participate in the exchanges fell by 28 percent.

Of the 9.2 million, about 3 million were new consumers while 6.2 million were returning consumers. The figures include any cancellations that occurred during the period.

Trump’s surprise victory in early November as the enrollment period got underway created serious doubts about whether people would sign up for the insurance program.

A move by the Trump administration to pull television ads reminding consumers that the enrollment deadline was approaching likely contributed to the dropoff.

“This may have cost about 500,000 additional enrollments,” said Ron Pollack, executive director of healthcare consumer advocacy group Families USA, in a statement, calling the move an “attempt to sabotage enrollment.”

“And despite all that, millions of consumers still got their insurance through the ACA,” Pollack said.

Meanwhile, Republican efforts to repeal the healthcare law have stumbled over an inability so far to come up with a comprehensive replacement plan.

Republican Senator Lamar Alexander of Tennessee this week said changes to the law would be made in “chunks” and would be better labeled a “repair.”