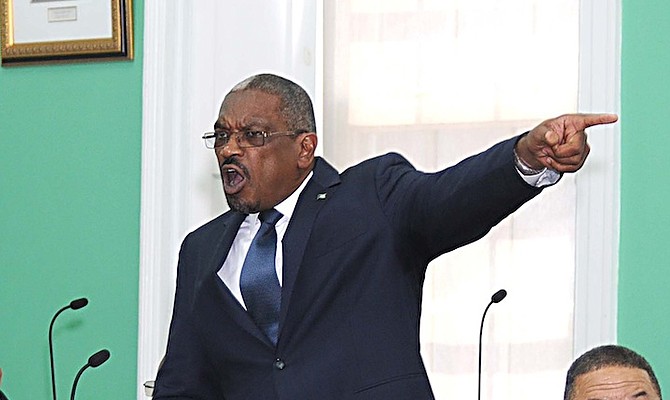 The Bahamian healthcare system is “not ready” for National Health Insurance (NHI), and will face a major challenge in coping with “an initial surge in demand” for services.

The PricewaterhouseCoopers (PwC) accounting firm, in its May 2015 report on key NHI plan elements, warned that no one seemed to have accounted for a likely increase in health services use by a newly-insured population.

This, PwC warned, was likely to “compound” the Bahamas’ challenge in controlling healthcare cost growth – a problem being experienced by many other countries.

It added that the demand-driven rise in healthcare costs will impose “significant pressure” on the Christie administration to either increase taxes, or re-allocate spending away from other high priority public services, to finance NHI.

“The current health system, for both primary care and hospital services, is not ready for the implementation of NHI,” PwC’s ‘confidential’ report to the Government warns bluntly.

“In the public system, there is a lack of information systems, organisation, clinical procedures, efficiency and capacity to accommodate NHI.”

PwC added that the public healthcare system’s primary care facilities were not ready to move to the proposed NHI ‘capitation’ payment method, which would pay providers a set per capita fee based patient numbers and services covered.

With the Government’s primary facilities lacking even “the processes required for patient enrollment and registration”, PwC added that public sector hospitals were also deficient in “infrastructure, expertise and organisation” to also shift to a new payment model.

“The private sector will also experience challenges in the event that NHI will provide greater access to their services,” the PwC report added.

“Proceeding with implementation of the Vital Benefits Package given the uncertainties that have been identified relating to the cost of the benefits package and the funds available will represent a significant risk to the Government.”

The Vital Benefits Package, which represents the basic level of health services that will be financed by NHI, was originally priced at $362.6 million. Yet Sanigest Internacional, the Government’s consultants and NHI scheme architects, told Tribune Business in August that this figure had risen to $400 million.

Prime Minister Perry Christie earlier this month admitted that the Government still had not determined how much NHI will cost – with the scheme’s supposed implementation now less than two months away.

Nor has it identified the services that will be covered by NHI, hence PwC’s reference to “uncertainties”.

The accounting firm also implied that little allowance had been made for a likely upsurge in health services demand upon NHI’s implementation.

It added that a newly-insured Bahamian population would sharply increase their consumption of medical treatments they had been unable to afford in the past.

“A significant proportion of the new enrolments into NHI will not previously have had health insurance,” PwC warned.

“It is likely that enhancing access to healthcare professionals to a previously underserved population, the system will experience demands on services that exceed capacity during the early years of NHI.

“The result will be significantly higher system utilisation, increased wait times and decreased patient satisfaction until the system is able to achieve a balance between demand and capacity.”

The PwC report implied that not only have Sanigest and the Government under-estimated NHI’s initial costs, but also its future burden and the implications for the Budget.

It added that Sanigest’s calculations assumed a “straight line percentage rate of growth” in NHI costs, even though all countries were challenged in restraining such expansion rates.

“This difficulty in controlling cost growth has put significant pressure on government budgets, often to the detriment of other government services,” PwC said.

“This challenge will be compounded in the Bahamas, as the system experiences an initial surge in new demand for services. This will put significant pressure on the Government to increase taxes or divert funds from other government programmes.”

PwC was also highly critical of the Government’s NHI governance structures or, more to the point, the lack of them.

“The NHI project currently lacks any clear or established governance structure or leadership,” the report warned. “This lack of clarity is creating confusion in the various participating government stakeholders and lead consultants.

“The participating stakeholders have agreed a common governance structure, but to-date it has not been implemented. There is recognition of the need to hire a chief executive and a staff team to support NHI implementation. However, this has yet to be sanctioned.”

Prime Minister Perry Christie seemingly acknowledged these flaws when he appointed Peter Deveaux-Isaacs to head the Government’s NHI steering committee, bringing the responsibility for NHI implementation directly under his office and removing it from the Ministry of Health.

Yet several members of the Medical Association of the Bahamas (MAB) have privately told Tribune Business that this message has yet to get through to the Ministry of Health, which is forging ahead with NHI without regard to the committee.

“NHI is a complex, expensive project and currently no comprehensive project management plan exists,” PwC said. “We would expect the plan to contain resourcing, timelines, costing, critical path and interdependencies.

“In addition, options for a staged implementation have not been developed or presented to the Government for consideration. It is now widely recognised that a phased approach to implementation will be necessary, and discussions regarding the details of such a plan must begin immediately in order to ensure the first phases of implementation by January 2016.”

Sanigest is proposing that the first four months of 2016 will be spent enrolling Bahamians and legal residents in the NHI plan. The Vital Benefits Package will then be launched around April 2016, followed by coverage for certain catastrophic illnesses.

A National Health Insurance Commission will be created as the governing agency overseeing NHI, but the PwC report warned that its operating model had yet to be established. Staff has to be hired, and an organisation and administrative systems have not been built yet.

The PwC report added that with the Government looking to existing Budget healthcare spending for the bulk of Vital Benefits Package financing, it needed to carefully balance the re-allocation.

Sanigest’s proposal suggests most of the NHI monies will come from re-purposing the initial allocations to the Public Hospitals Authority (PHA) and Department of Public Health, plus existing insurance premiums for government employees that are paid to private underwriters.

“These amounts must be carefully calculated so that sufficient funding is available for both NHI and uninsured services that must still be provided by the Public Hospitals Authority (PHA) and Department of Public Health, and elsewhere within government,” PwC added.

The same applied to existing private health insurance policies for government employees. These included some services that will not be covered under NHI, but which the Government must continue paying private insurers for.