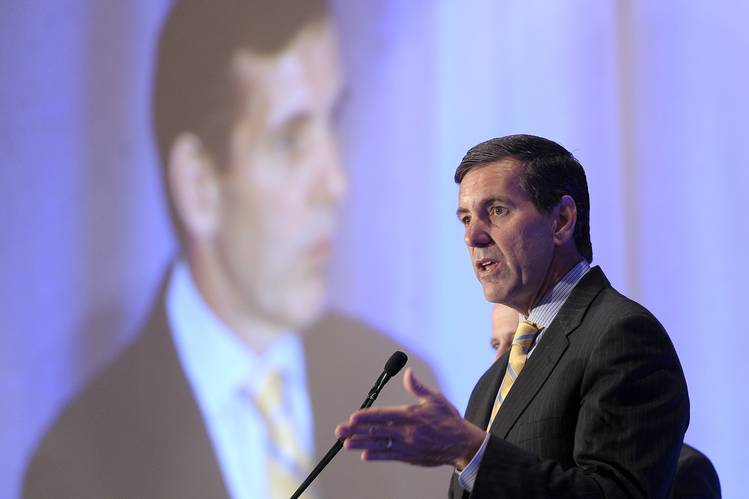 Those revelations have prompted many Wall Street analysts over the past two weeks to name Anthem as a likely buyer, even though reports by Dow Jones Newswires and Bloomberg News have cited other companies as the most likely suitors.

“By our analysis, a deal with Anthem would be the most accretive followed closely by Aetna, with a deal with Cigna significantly less accretive,” wrote Morgan Stanley analyst Andrew Schenker in a note to investors Monday morning.

Likewise Deutsche Bank analyst Scott Fidel, referring to Anthem and Humana by their stock er stickers, wrote, “We think the deal that makes the most strategic sense is ANTM/HUM.”

Analysts offered their views after May 29 news reports said Humana has hired an adviser to explore a sale. Hartford-based Aetna Inc. and Philadelphia-based Cigna Corp. were cited as potential buyers of Humana, and some analysts have even speculated that Aetna or Anthem could acquire Cigna.

Anthem was built by acquisition, as the Indiana Blue Cross and Blue Shield plan scooped up peer Blues plans in several other states. Anthem became the nation’s second-largest health insurer in 2005 by swallowing up an even-larger competitor, California-based WellPoint Health Networks. But since then, Anthem has done only smaller deals, with the largest being its 2013 acquisition of Virginia-based Amerigroup Inc.

Rumors of a sale have been swirling around Humana for months, in part due to poorer financial results and in part due to its large Medicare Advantage business. Such private plans have been growing in popularity among seniors—now enrolling roughly one out of every three Medicare beneficiaries—even as the overall ranks of seniors balloons each year with more baby boomers.

Anthem has one of the smallest Medicare Advantage businesses among the five largest health insurers, but its leaders have vowed to grow that business. Earlier this year, Anthem closed on a small Medicare-focused acquisition, with its purchase of Florida-based Simply Healthcare Inc.

But analysts started considering Anthem a likely buyer of Humana after CFO Wayne DeVeydt told an investor conference on May 19 that low costs for borrowing are creating opportunities for companies to grow through acquisitions, according to Reuters.

“I like the pricing environment a lot and we have a lot of capacity to work with to do a cash transaction of meaningful size—and it would be transformative,” DeVeydt said. He added, “We believe this is an industry that is going to continue to consolidate. We plan to be prudent in our M&A.”

Some analysts assumed Anthem could pay $230 per share—or $34.5 billion—and yet still have the deal boost its profits in year one after close.

Because each of the companies is strong where the other is weak. Humana is a market leader in Medicare plans, with 9.8 million members and high-quality plans, whereas Anthem has just 1.4 million members and lots of plans with mediocre quality ratings.

But Humana has struggled to post profits on its small business and individual businesses under Obamacare’s new rules. By contrast, Anthem has stunned analysts by posting profits on it’s the Obamacare exchanges of more than 4 percent even while grabbing a market leading share about 900,000 members.

“This suggests that ANTM could likely pay a higher price for HUM than either AET or CI and still make the deal financially accretive,” Fidel wrote, referring to Aetna and Cigna by their ticker symbols.

On top of that, Fidel added, Anthem could save about $500 million per year on its pharmacy benefits contract with St. Louis-based Express Scripts if it was able to negotiate with the added leverage of Humana. That company runs its own pharmacy benefits manager, so Anthem could either threaten Express Scripts that it would pull its business in house or extract significant cost savings for the privilege of getting both the Anthem and Humana business combined.

Combined, Morgan Stanley’s Schenker thinks an Anthem-Humana deal would generate $1.1 billion in “synergies,” which could boost profits by more than 10 percent.