Facebook will let users choose to get personalized reminders about health care tests and vaccines. The company’s new Preventive Health tool focuses on getting people information about cancer screenings, heart checkups, and flu vaccines — all measures that could hopefully help people catch deadly conditions long before they become lethal.

The tool is simply called Preventive Health, and is now available to Facebook users in the United States. It takes a user’s age and sex from their Facebook profile and provides them with a list of recommended screenings based on those two data points.

“Let’s say you’re 52 years old,” Freddy Abnousi, Facebook’s head of health care research, tells The Verge. “One of the things that will come to you — based on the American Cancer Society’s recommendations — is that you should have a colorectal cancer screening.” Abnousi says that the app will then give you more information about what kinds of tests are available, from a colonoscopy to a stool test or a CT scan. Abnousi hopes that users will then take what they’ve learned and talk to their primary care physician about what would be best for them. Users can also adjust the age and sex in the tool to get different screening recommendations without having it affect anything on their profile.

This marks Facebook’s second venture into health-related tools. Its other effort, promoting local blood drives, launched in the United States in June after debuting in India in 2017. Overall, both of these tools mark a far more simple entry into the health space than other tech giants have made. Amazon has been getting into online pharmacies and electronic health records, Apple is monitoring your heartbeat, and Google might be trying to buy Fitbit. In contrast, Facebook’s latest entry is basically enhanced reference pages from official websites mashed together with a calendar reminder, and tailored to broad demographics instead of individuals.

If you have a primary care physician, they might send you similar reminders every year — come in to get your pap smear or your cholesterol checked. Facebook’s system is similar, but more generalized, since it’s not connected to any medical records or doctors’ offices.

“We never see any of your health care stuff,” Abnousi says. “This is simply taking information, making it understandable, and delivering it to our users and the people across Facebook.”

In the tool, people can schedule a reminder for their screening, and mark when it’s complete. If they don’t have a primary care physician, they can also look up locations for more affordable “federally qualified health centers,” where they can talk to a provider about these screenings. (The app will also show where people can get a flu shot during flu season.) 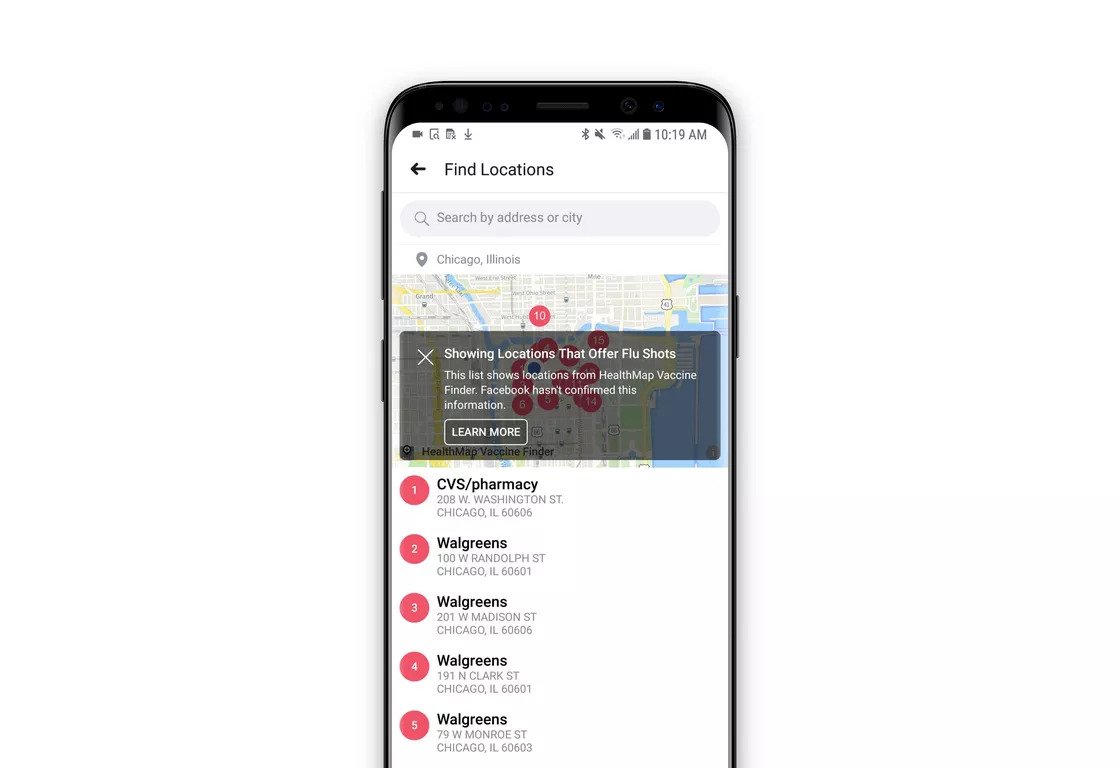 If you use Preventive Health on Facebook, you can share the tool itself with your network, but not information within it — for example, Facebook says you won’t be in danger of posting reminders of your mammogram from the tool to your timeline.

Other privacy measures are detailed in announcements of the new tool. In one post, Erin Egan, VP and chief privacy officer of public policy, writes, “We don’t share personal information about your activity in Preventive Health with third parties, such as health organizations or insurance companies, so it can’t be used for purposes like insurance eligibility.“ In another post, Abnousi adds, “We don’t show ads based on the information you provide in Preventive Health — that includes things like setting a reminder for a test, marking it as done or searching for a healthcare location.”

A limited group of developers at Facebook will get some limited data about whether people are clicking on the tool at all, and will use that to try to tweak it over the next six months to a year. If it proves popular, then they will consider expanding the effort to more countries, or including more information. About a week after launching in English, Facebook says it will launch a Spanish version.

The recommendations that appear in the tool were built using information from organizations including the American Heart Association, the Centers for Disease Control and Prevention, and the American Cancer Society, and were reviewed by those organizations for accuracy before being posted to the tool.

Abnousi says that Facebook’s position is: “let’s focus on giving people tools for prevention, from the experts, and hopefully they will drive their own preventive care.” Whether people will actually want to have reminders of their frail and fleeting humanity sandwiched in between chats with friends remains to be seen.