In my three most recent blog posts, I’ve been unpacking the concept of “systemness”—and seeking to understand why so few systems have been able to achieve it. I’ve been breaking it down though a four-part framework my Advisory Board colleagues developed, which I initially used to explore first-level systemness, which we define as using scale effectively to build operational advantage, followed by second-level systemness, which we understand as achieving clinical advantage by reducing unwarranted variation in all patient-facing processes.

Today, I want to move the discussion to level three: How can systems attain a competitive structural advantage? Proponents of mergers, acquisitions, and partnerships often cite economies of scale as their primary rationale. But, in practice, combined systems rarely make the changes to their fixed assets to realize these economies. (A note: While my previous posts also looked at economies of scale, the key distinction here is that levels one and two are largely about addressing variable costs, whereas I’m focusing now on fixed assets.)

It’s not a fault of logic. As systems get larger, they should be able to spread their fixed costs across a larger number of patients, service lines, and sites of care. But doing that proves to be much more challenging in reality than in economic theory. All too often, systems grow the size of their asset base without fundamentally rethinking the configuration of those assets or how they are used. As a result, the economies of scale they hoped for are never realized.

In practical terms, this inaction means duplicative investments (two cath labs in a market that can only support one), overcapacity, and inadvertent competition within the same system. And internal inefficiencies aren’t the only consequences—communities suffer as well. With health system capital tied up in unnecessary and redundant assets, other community needs (such as for behavioral health services, care management, and virtual care) remain unmet. 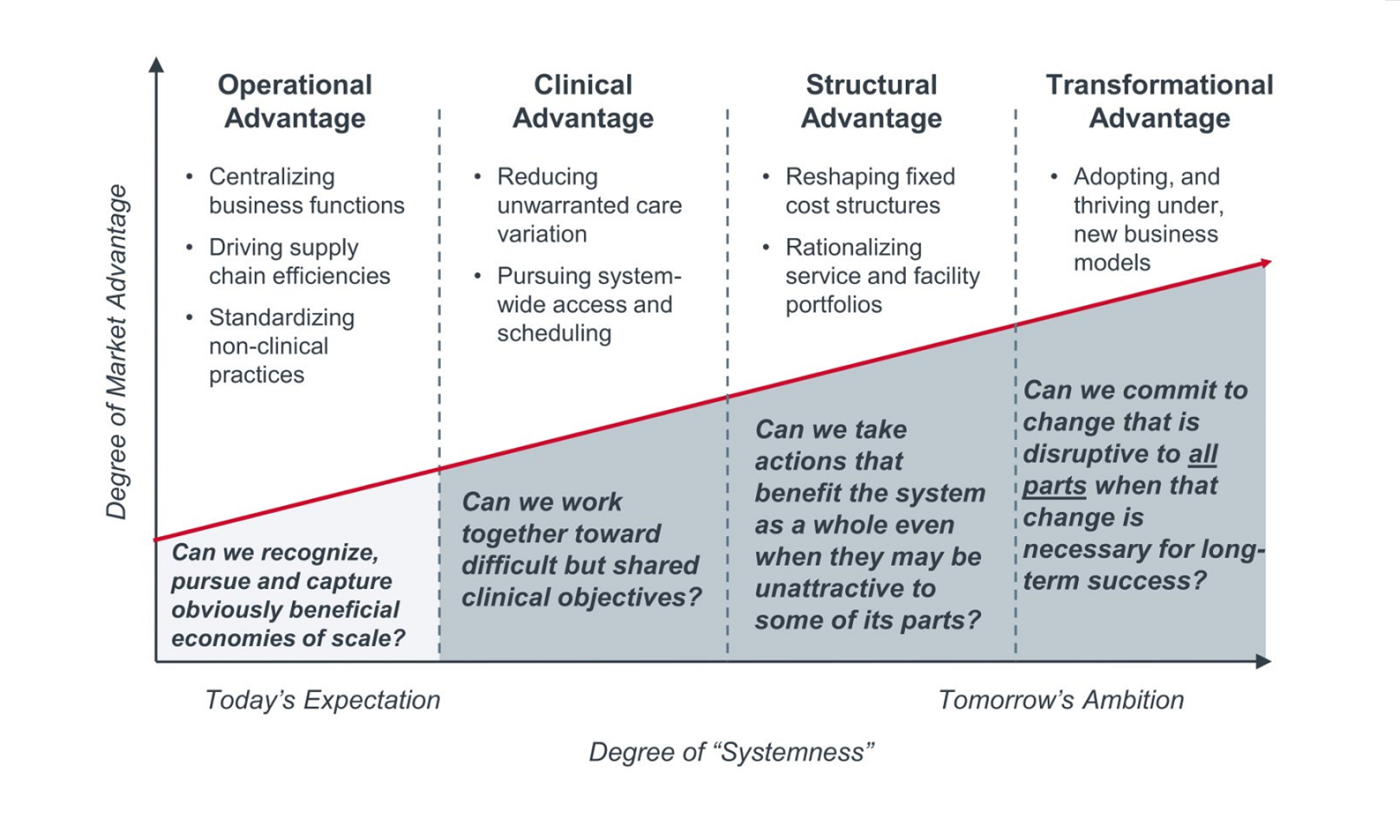 Organizations achieve “level three” systemness when they are consistently willing and able to make decisions about asset allocation based on what is optimal at the system level, rather than for each facility independently. By definition, this perspective means taking actions that benefit the system (and the community) as a whole, even if those actions require changes that are less than optimal for any individual facility. Achieving this level of systemness requires leadership to have very difficult conversations with stakeholders, including those external to the organization. In my experience, very few organizations have demonstrated the ability to do this successfully.

Most geographically contiguous health systems have significant opportunities to rationalize service lines. Doing so can benefit the system financially by cutting costs (if total capacity exceeds likely demand) and reducing intra-system competition (having competing service lines in close proximity almost certainly means that the system is investing resources competing with itself for volume). It also can benefit quality (if one or more facilities have demonstrably superior outcomes compared to others). Failing to rationalize service lines when faced with either scenario is therefore either fiscally or clinically irresponsible.

Service line rationalization necessarily means asking some stakeholders to sacrifice for the good of the whole. Medical staff (including doctors, nurses, techs, and other members of the care team) may have to shift their primary place of employment or travel greater distances to provide certain services—which can easily affect engagement and retention. Some facilities will see volumes move to other facilities, potentially influencing the variable compensation of leaders. Communities accustomed to having certain services available in close proximity may react negatively. Yet while all of these are legitimate concerns, none is a sufficient reason to make suboptimal decisions about asset allocation at a time of razor-thin margins.

In many communities today, especially rural ones, acute care facilities operate well below capacity. It is not unusual for average occupancy rates to be 50% or lower. I recently met the CEO of a 25-bed critical access hospital that at one point had an average daily census of two patients over a nine-month period. Few health systems can carry the financial burden of a hospital that cannot cover its fixed costs, and for many health systems that has meant outright closure of such facilities, and a resulting PR nightmare. Yet many rural communities are the areas that most need access to resources like 24-hour urgent care, or greater access to behavioral health services and chronic care management.

Health systems can often better meet the needs of the communities they serve by repurposing acute care inpatient facilities into comprehensive ambulatory care centers, or by using those dollars to fund robust programs offering remote access to specialists and subspecialists. IU Health in Indiana is an excellent example of a health system achieving level three systemness in this way. The organization’s CEO, Dennis Murphy, shared his perspective on asset rationalization in this insightful interview with my colleague, Eric Larsen.

Closing or repurposing an underutilized hospital is not the only option. Some health systems achieve third-level systemness in a different way, by using such facilities as a pressure-release valve on tertiary care centers that are constantly at or over capacity. WVU Medicine in West Virginia offers an instructive case study. By providing tele-ICU and tele-neurology services to its critical access hospitals, the organization has been able to provide specialized care at spoke sites, closer to patients’ homes, while also freeing up bed capacity at its flagship academic medical center to care for patients with more complex problems.

How to set yourself up for success

In each of the examples just discussed, successful organizations were able to make tradeoffs that reduced services, volumes, income, capital assets, or operating budgets at one or more facilities to achieve greater gains elsewhere. In each case, someone (a patient, a physician, a community, or an executive) was asked to accept a change in how he or she delivered or received care. Such tradeoffs are inherently challenging to implement, because they require the buy-in of large numbers of stakeholders who may perceive the changes as less beneficial, or even detrimental, to them personally.

Clearly, some organizations are finding ways to manage and overcome these personal conflicts. In my conversations with leaders from these organizations, I’ve struck at how they were able to take these actions after they had begun with some enabling steps. Those steps, across four domains, are:

Consider the above to be a very important litmus test: Before embarking on any initiative involved in achieving level three systemness, take the time to assess your organization honestly across each of these four domains. If any of these four enabling factors are missing, then you are almost certainly going to be asking people to act contrary to their own interest. While that doesn’t definitively preclude success, it almost certainly exacerbates the challenge of change management.

Stay tuned for my next post when I move to fourth-level systemness and examine the organizations that have been able to disrupt all parts of their business for the sake of gaining transformational advantage.

Successfully growing market share is a critical component of a sustainable margin management strategy, but hospitals and health systems across the country are struggling to win the growth they need.