Boeing CEO has been removed from the position of Chairman by the board of directors, as the board intends to give Dennis Muilenburg time to concentrate on bringing  Boeings 737 Max back to service.

Boeing’s best- selling Jet has been grounded for more than seven months, and the group is looking for its revival. The directors wanted to make sure that the CEO can strategize better how to work things out relating to Boeing 737 Max revival. The Chairman’s post now goes to David Calhoun, who is the lead director.

Re-certification Decides Whether Max Goes Back in Air

An Aerospace analyst. Richard Aboulafia has said that if Boeing manages to be on a path to recertification in the Q4 of 2019, then Dennis Muilenburg’s Job is safe. The Giant planemaker is also a key party in the US-China trade relations that may look for the talks with the United States before making the Phase One deal. Donald Trump has announced a significant turning point in the same. As per the President, a partial agreement can bring about 20 billion dollar sales of Boeing aircraft.

Tough Times for the CEO

On Friday, the 55-year-old CEO of the Boeing had a tough time amidst his attempts to bring Being MaX 737  back to air. He also prepares to appear before Congress on Oct 30 as Boeing is a critical player in the US-China negotiating deals.  In the recent past, the image and fiscal stance of the company have taken a beating following two crashes that have led to 346 deaths. 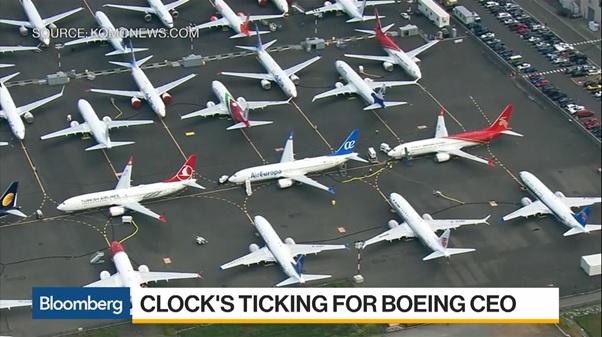 The Boeing planes have face worldwide grounding as the aftermath. The recertification of the aircraft will happen soon after the aircraft passes a crucial test flight. The test is not yet scheduled by the US regulators, though.

A Discouraging Report by Experts

A review panel of the aviation experts presented a discouraging assessment of the steps taken by the company. The report also charged US Federal administration for messing up in the way it certified and developed the Max from Boeing.

Reportedly, the company pressurized its employees having FDA authority to approve design modifications. It also charges regulators for undermining the rules and lack of skills and measures to be able to vet the changes in the design. The report was scathing, as it attributed flawed design changes responsible for two fatal air crashes.

Boeing CEO has some testing times ahead in the coming months, and the recertification would play a pivotal role in deciding whether he stays or has to leave.