Since its inception in 1999, Alibaba, the China-based e-commerce giant, headed by Jack Ma, has created waves in the technology world. The Chinese company has always given fierce competition to the US Tech and entities across the globe. Alibaba is now taking another massive leap into the world of AI. The company unveiled its first Artificial Intelligence Chip named as Hanguang 800.

The most advanced neural processing unit will make the machine learning functions fasters and extremely efficient for Hanguang 800. As per the E-commerce giant, this chip has capabilities of energy-efficient usage as well. 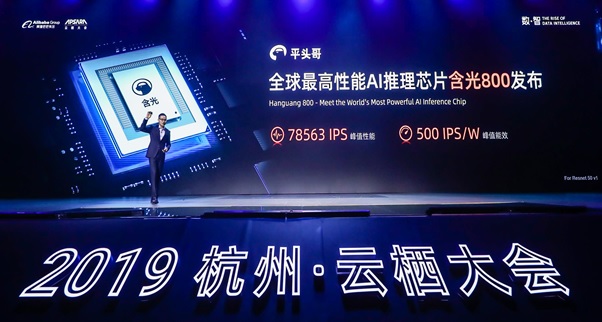 Unveiled at the Alibaba Cloud’s Annual Conference in Hangzhou, China, the AI chip is already being internally used by the e-commerce sites of Alibaba to enhance its product search and customized product suggestions.

“The launch of Hanguang 800 is an important step in our pursuit of next-generation technologies, boosting computing capabilities that will drive both our current and emerging businesses while improving energy-efficiency.”

The First AI Chip is developed at T-head, which is a chips development unit for cloud and Edge computing in the Alibaba DAMO academy. The chip enhances the product search features of the largest eCommerce sites in the world and is exceptionally efficient in automatic translation, intelligent customer services, and advertising.

Would be Available to Alibaba Cloud Customers

The Hanguang 800 would be open to the Alibaba Cloud customers for sale, though the exact date is not yet shared.

A Boon to the Chinese Companies

Hanguang is being seen as a boon for Chinese companies as it will decrease the dependence on US technology. The recent trade war between the US and China has created troubles between the trade collaborations between companies of both super-powers.

Alibaba plans to enable its customers by giving them access to advanced computing that can be achieved through this chip at any given time and any given place.

The advancements in AI technology can help Alibaba create better visibility in Asia-Pacific markets where it still lags behind Amazon and Microsoft for the cloud sector. This chip could propel Alibaba to the heights it is aiming at.