US Energy Department is the first-ever buyer of The Cerebras WSE, which is the world’s largest and fastest Artificial Intelligence Chip made. Announced only a month ago, this Chip is aiming to speed up the deep learning at the various computing centers.

The Lawrence Livermore Laboratory and  Argonne National Laboratory are the first institutions to use the Artificial Intelligence computers that have the biggest silicon chip in it.

Cerebras WSE is the Biggest A.I. Chip Ever

Cerebra WSE has around 40 thousand programmable processor cores and comes with 18 GB memory. The WSE comprises of 1.2 trillion transistors. It is 56 times larger than the current largest GPU for the artificial intelligence available in the market. The WSE is rated at a massive 15KW. 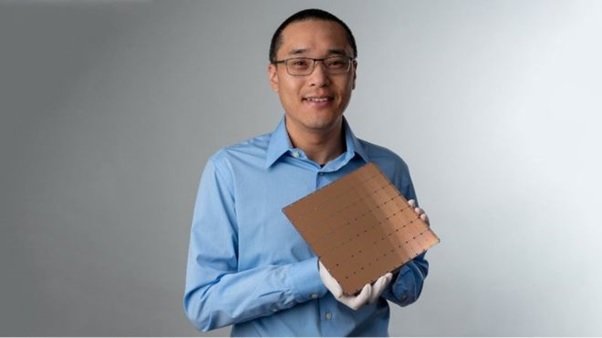 Large data centers use GPU based servers to conduct neural network training. With the new Chip, this speed accelerates, and machine learning is enhanced. Cerebras will start selling the notebook-sized chip-enabled computers in the last quarter of this year.

Lawrence Livermore and Argonne will be the first department of energy units to use these chips. The collaboration is, however, for multiple labs of the department for many years to come. In coming months the company plans for different laboratories also.

According to Rick Stevens, the head of computing at Argonne Laboratory the integration of the most gigantic and fastest A.I. chip within the advanced infrastructure of the laboratory will act as a catalyst for the deep learning research for the department in science and health fields. They would be able to create and examine newer algorithms and find new ways of scientific advancements.

The Cerebras computers will work in tandem with the currently installed supercomputers in the two Department of Energy Labs and fasten the A.I. processes in the machines. Argonne has plans to house the Aurora, which is U.S.’s first exascale computer.

The U.S. Energy Department created the A.I. and Technology office this month to leverage the benefits of Artificial Intelligence to resolve the issues U.S. national labs deal with in general.

With the great features of the world’s largest and fastest A.I. Chip ever made, the U.S. Energy Department is aiming to accelerate its deep learning and enhance its research capabilities.