Starbucks CEO says that the company is fairing well on the various business fronts. The coffee giant has restaurants and outlets across the world. When the global economy is under the fear of a looming recession, the chain has reportedly done good business. The company is doing good and ” Firing on All Cylinders” according to the latest statement given by CEO Kevin Johnson. 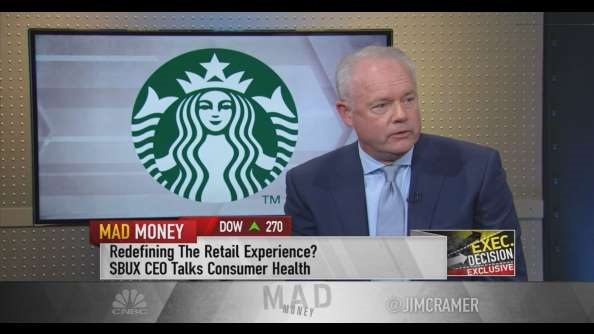 Kevin Johnson said that the credit for the company’s success goes mainly to the previous CEO Howard Schultz and his team. It was they who created a mission for the organization that visioned more benefits mere than monetary profit.

The company plans to take care of the veterans and military spouses who partner with it. The company had set a goal of hiring around 25ooo military spouses or veterans, and now they hire around 5000 veterans every year. The focus is on investing in the teams and helping them in their college education and assist in health care.

Starbucks is targetting the cold beverages market as an assumption that the coffee drinkers consume hot coffee only in the morning to jumpstart the day. After that, they consume cold caffeine drinks are prepared for the whole day in cold water. The new opportunity for selling drinks afternoon has motivated Starbucks to venture into cold drinks market targetting new generation.

Starbucks Shares on the rise

The shares of Starbucks have gone up by nearly 50 percent this year. With an increase of around 1.9 percent on Monday with the stock closing at 96.50 dollars.

Starbucks CEO, Johnson is a former technical expert. He expressed that the coffee giant is moving ahead on the correct oath where they are creating innovations. They are creating newer processes that are pertinent to their customers and motivating their partners and bringing betterment to the business.

The revenue of Starbucks reached 6.8 billion dollars in the last quarter, which is 8 percent more than that of the same tenure in the previous year. The store sales have gone higher by 7 percent in the US. Even in the tension brewing between the US and China, it is recorded at 6 percent in China.