The Federation Trade Commission has levied a fine of Five Billion dollars on social media giant Facebook last Wednesday over the privacy policies hitches. The Antitrust Fine is one of the largest amounts ever imposed on any technology company by FTS over such issues.  This amount is seemingly large with totaling upto about a whopping 9% of the company total revenue in year 2018.

In the past Google has also been fined by European Union for antitrust issues.

There have been many incidents and controversies revolving around Facebook’s and Google’s privacy policies. Protection of User information has been under critical reviews as it is believe the companies are sharing it with third parties over the time. Though Facebook and Google have been renewing its safety features and decreased the number of apps that can access data, still there is serious concern.

The FTS took into account the various issues and after around a year of scrutiny and reviews a settlement of $5 billion was decided. It is primarily for the violations indicted on the safety.

Even though Facebook has time and again stressed that it confirms user data security and privacy, this fine has come as a blot on its repute.

The settlement is no doubt a huge amount however it is too early to say how much impact it would have on Facebook growth. As it is predominantly the biggest platform of social media. 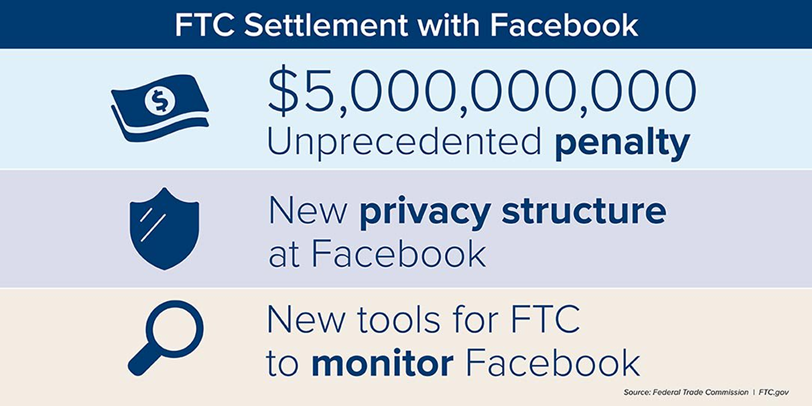 This settlement is around the various controversies that arose after Cambridge Analytica scandal and data leaks of user’s info in the public digital space.

It is believed that the amount is very small for Facebook and it is not going to impact its business however the problem is weak policies due to which the privacy of user data is still at stake.  Similar fine on Google would also not impact it much as it is pioneer in the Search Engine and technical apps domain.

The tough punishment and huge fine came into picture after the two Democratic Party commissioners had voted against Mark Zuckerberg.

This is an eight year old law suit which after years of review has been imposed on the tech giant.  People are still finding it less impactful because apart from monetary fine, the order does not restrain Facebook from deciding how much information it can take from users and how to use it if it is documented properly.