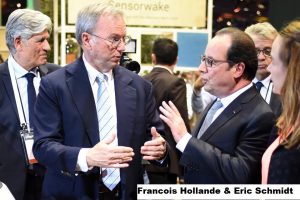 In the 1967 film “The Graduate,” a family friend offers young Ben guidance for his future:Plastics. Good call. Shares of plastics giant DuPont are up more than 5,000% since.

Google is having that consigliere moment right now with cities. Like Mr. McGuire in the film, it wants to whisper just one word: Parking.

Not long ago, Eric Schmidt, the chairman of Google’s parent company Alphabet was being pressed about when he thought major cities would begin seeing the self-driving cars everyone’s talking about. He offered a strange insight. He said it depended on the availability of parking. There wasn’t much pushback because, quite frankly, Schmidt has a history of bizarre comments. Yet this time he may have actually spilled the beans about how the company thinks about the future of cities.

Recently the mid-Ohio city of Columbus was awarded a $40 million grant for winning the Department of Transportation Smart City Challenge. We all know cities are going to use the Internet of Things to get smarter. And by smarter, the inference is low cost sensors collecting data that is sent to powerful cloud computer networks where it is crunched and made actionable – so traffic moves more efficiently and public resources are better allocated. That’s the dream.

The engineers at Alphabet’s Sidewalk Labs have some ideas. Like all things Googly, their solution involves machine learning and a heaping helping of data. Basically, they believe the single biggest hassle of city life is congestion and the biggest cause of that are motorists driving around looking for places to park. Countless studies back up this idea. Solve the parking problem and you solve congestion. To do that Sidewalk developed a cloud based application called Flow.

Flow combines data from Google Maps, Streetview, the current sensors on all smartphones and new ones from parking meters to estimate what spaces are available at any given moment. When a motorist arrives in the city, Flow directs her to the closest available spot. That’s cool. The magic – and the attraction to cities like Columbus – is that Flow can take this to another level by also including private spaces like unutilized office building or urban retail mall parking.

These virtualized spaces can then be monetized by the city according to demand. So they might be cheap on the weekends or late afternoons and get a bump during sporting events or concerts. Think Uber’s surge pricing meets Airbnb for cars. Sidewalk is pitching these spaces as another source of revenue worth at least $2,000 per space annually.

For its part, Sidewalk would handle all of the billing through an integrated payment system and collect all of the sensor data. In the second phase of Flow, the app would make optimized transit suggestions based on location and preference including ride-hailing, Zip cars, taxis, public transit and even bicycle sharing. Columbus would get a 1% fee off the top.

All of this is not without risk. Buying in means giving up a lot of data up front and a good deal of control over mobility-as-a-service in the future. Being the first mover could be very lucrative for the Alphabet unit. It could also extend corporate reach into public services and data in a profound and potentially disturbing way. You may prefer to stay home rather than park your privacy.