An employee assembles customer orders at the Jet.com Inc. fulfillment center on Cyber Monday in Kansas City, Kansas, U.S., on Monday, Nov. 30, 2015. Online sales on Cyber Monday may rise at least 18 percent from a year earlier, slower growth than during the holiday weekend, as consumers start their Internet shopping earlier, according to forecasts by International Business Machines Corp. Photographer: Daniel Acker/Bloomberg 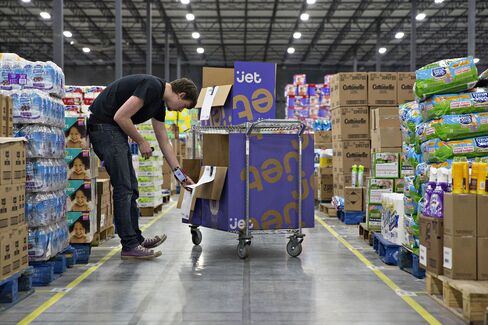 The deal includes $3 billion in cash and $300 million in shares that will be paid over time, the world’s largest retailer said Monday in a statement. With Lore taking over all of Wal-Mart’s online business, the retailer’s current head of e-commerce, Neil Ashe, will step down.

The move is Wal-Mart’s biggest attempt to date to chase down Amazon, which has dominated e-commerce in much the same way that Wal-Mart has ruled brick-and-mortar retail. Wal-Mart had spent billions expanding its online operation, including hiring thousands of workers, opening two offices in Silicon Valley, and building large e-commerce distribution centers. It also started a subscription service similar to Amazon Prime, at half the price, but still trails the e-commerce behemoth in online sales. Jet.com gives Wal-Mart a website that achieved a $1 billion gross merchandise run rate in a little more than a year and is adding 400,000 shoppers monthly.

“Wal-Mart has definitely put its stake in the ground saying, ‘We’re going to be winning in e-commerce,’” said Joseph Feldman, an analyst at Telsey Advisory Group. “Amazon should be concerned about what Wal-Mart is doing.”

Jet.com has distinguished itself in e-commerce through “gain sharing,” luring buyers to add items to their orders to reduce shipping costs, and to pay with debit instead of credit cards to reduce transaction fees. Traditional store-based mass retailers such as Wal-Mart, Target Corp. and Costco Wholesale Corp. have been struggling to fend off Amazon’s momentum in online shopping.

Wal-Mart and Hoboken, New Jersey-based Jet will maintain distinct brands, with Wal-Mart focusing on its strategy of offering goods at low prices every day, the companies said. Jet will continue providing a more “curated” assortment of products through a more unique customer experience.

The acquisition of Jet.com is Wal-Mart’s largest ever deal in the U.S. and marks a shift in tactics for the retailer, which has typically built operations from within over its history. Wal-Mart is betting that if anyone can help it catch up to Amazon, it’s Jet.com founder Lore

Lore, 45, duked it out with Amazon as founder and chief executive officer of Quidsi, best known for Diapers.com, before a protracted price war and tight credit market during the Great Recession forced him to sell to his competitor for $550 million in 2010. After working for Amazon as part of that deal, he emerged with Jet in 2015 and a plan to challenge Amazon yet again.

Lore is “one of the smartest people in e-commerce” who will bring a new kind of thinking to Wal-Mart to help it transition to digital commerce, said Sucharita Mulpuru, an analyst at Forrester Research Inc. “Wal-Mart still struggles with things like third party marketplaces, which Marc and his team have successfully built.”

It remains to be seen whether Jet.com’s model can be scaled up and how long Wal-Mart will tolerate the business operating at a loss, said Brian Yarbrough, an analyst at Edward Jones & Co.

“Amazon is such a machine,” Yarbrough said. “You aren’t going to out-Amazon Amazon.”