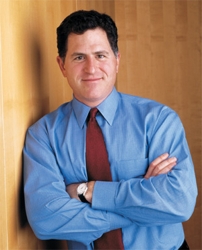 Michael Dell won a surprising and important victory on Monday when Institutional Shareholder Services, the influential proxy advisory firm, recommended that shareholders of Dell DELL 0% take his $24.4 billion buyout of the company.

ISS pointed to the certainty provided by the all-cash $13.65 per share offer and the 25.5% premium the deal put together by Michael Dell and his partner, private equity firm Silver Lake, represents.

The ISS recommendation breaks the momentum that investor Carl Icahn appeared to be building in his effort to counter Michael Dell’s leveraged buyout proposal with a leveraged recapitalization plan. Icahn last week showed that he had the financing to back his proposal for Dell that would potentially see shareholders tendering 1.1 billion shares for $14 each. At the same time, Dell’s board special committee that is independently assessing the deal for the company’s shareholders had gone back to Michael Dell and advised him to increase his bid for the PC maker.

But Michael Dell has held firm in this game of poker, refusing to budge and be pushed by Icahn, a big Dell shareholder, to pay more for the company he founded. Michael Dell wants to take the company private as he attempts to rebuild it into more of an equipment and software company. In making its recommendation supporting Michael Dell’s going private transaction, ISS cited the risks shareholders of Dell face as the company’s PC business continues to decline.

The ISS victory should help Michael Dell when the company’s shareholders vote on his leveraged buyout deal on July 18.