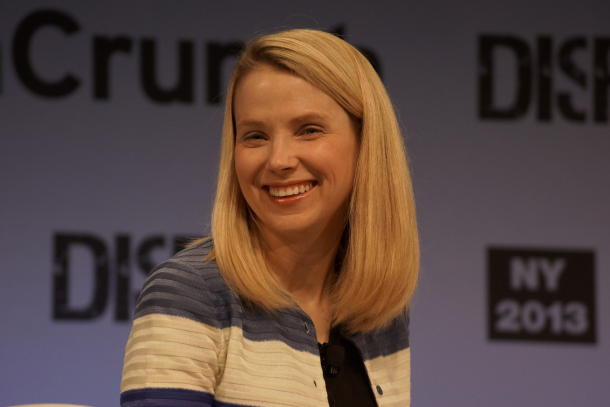 Marissa Mayer says employees are working with a developer version to see how users could operate Yahoo programs with the eyewear.

Google’s Internet-connected eyewear has generated a lot of buzz, but it’s still too early to know if it will take off. So far, the glasses come with few apps and limited functionality, but many developers are working on creating software for Glass, spurred in part by some big Silicon Valley investors looking to back startups making Glass apps.

Mayer said Tuesday at a Wired business conference in New York that Yahoo has gotten its hands on some developer versions of Google Glass, and employees are looking at how people can operate Yahoo’s programs using the device.

She did not specify whether Yahoo will be releasing any apps.

Meanwhile, Mayer also said a key focus in her time at Yahoo has been getting the company to move faster. She said the company is “really uniquely suited” for the mobile world, as its products fall into the main activities consumers do on their phones — such as checking e-mail and sharing photos. Currently, 300 million people use Yahoo’s mobile apps, while 700 million visit the desktop site each day, Mayer said.

There’s also a big opportunity for Yahoo to innovate the user experience for search, she said, including areas such as voice search and universal search and “bringing back different kinds of results.” Yahoo will maintain its search relationship with Microsoft, she said, so it can focus on the user interface instead of the back end of the search process.

“The moonshot for Yahoo is being on every smartphone, very tablet, every PC, every day for every Internet user,” Mayer said. “The nice thing is we’re not that far off. But that said, we do need to grow. And we need to grow in a way that’s not just with the market growing.”