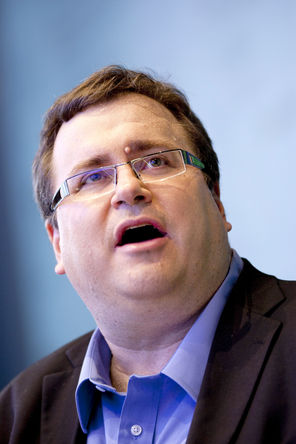 While “social” companies struggle with uneven stock performance and other challenges in 2012, LinkedIn saw its revenue, profit and share price surge by 80 percent, thanks to its membership of 200 million professionals and the prospective employers who pay to reach them.

One of the most successful social-networking companies in Silicon Valley saw tremendous growth last year, primarily because it’s not a place for posting vacation photos, rating restaurants or playing online games with friends.

While Facebook and other “social” companies struggled with uneven stock performance and other challenges in 2012, LinkedIn saw its revenue, profit and share price surge by 80 percent, thanks to its membership of 200 million professionals and the prospective employers who pay to reach them.

And by doing so, experts say, the networking site has turned the world of recruiting and hiring on its head. As more people post their résumé on LinkedIn, corporate headhunters are increasingly using the site to identify potential employment candidates — including people who aren’t actively looking to change jobs — rather than wait for them to submit an application.

“It has absolutely changed the way that we do everything,” said Martin Millington, senior vice president for human resources at Quantros, a Milpitas, Calif.-based health-care technology company. Instead of just posting openings and hoping for a response, he said, recruiters use LinkedIn to search for prospects who meet their criteria, view their professional connections and even contact them discreetly.

LinkedIn, which started 10 years ago and went public in 2011, promotes itself as an online network for people who want to post their résumés and maintain professional contacts in a more business-oriented format than Facebook or other social sites.

The company makes some of its money from showing ads and selling premium features to members. But more than half its nearly $1 billion in annual revenue comes from employers and recruiters who pay for what LinkedIn calls its “Talent Solutions,” including job listings, corporate pages and online software that can perform sophisticated searches of LinkedIn’s member database.

LinkedIn recently upgraded that software, adding algorithms that “recommend” potential job candidates — based on such factors as experience, recent promotions and even where they have lived — and other tools to help hiring executives keep tabs on prospects they may want to recruit in the future.

Those changes won’t be apparent to most LinkedIn members, who are more likely to notice the recent redesign of individual profile pages and new features that let members “follow” well-known business leaders and other public figures. But the recruiting tools are a key to the company’s future.

“Talent Solutions is our largest and fastest-growing business,” according to Parker Barrile, a LinkedIn senior product director, who said more than 16,000 companies currently use the tools. While declining to discuss growth targets, he added, “We think we have a tremendous amount of headroom to reinvent the way people hire.”

LinkedIn did some hiring of its own last year: The Mountain View, Calif., company added 1,340 workers, bringing its payroll to 3,458. Along with a planned second campus in Sunnyvale, CEO Jeff Weiner recently told analysts the company is expanding in Hong Kong, Brazil and Europe.

Weiner, a former Yahoo executive recruited in 2008 by LinkedIn founder Reid Hoffman, has also pushed the company into new lines of business and beefed up its service for smartphones and tablets.

LinkedIn recently began offering additional content to members, including business news and expert blogs. It’s experimenting with a subscription service to help salespeople find customers through their contacts at other companies.

LinkedIn is introducing that service slowly to make sure it doesn’t come across as too “spammy” or annoying to members, according to Sterne Agee analyst Arvind Bhatia.

That’s been a concern with another new program that aggressively encourages LinkedIn members to endorse each other’s skills. While it spurs activity on the network, said Macquarie Securities analyst Tom White, the program risks diluting credibility by encouraging people to give endorsements too freely.

LinkedIn had some growing pains in June when it confronted a data breach and theft of 6.5 million member passwords. The company said it contained the breach and increased security before members suffered any major harm.

Analysts say the biggest threat to LinkedIn’s future is the prospect of a larger company, such as Facebook or Google, launching a competing service. But as LinkedIn continues to grow, White said, rivals may face difficulty persuading people to move their résumés and contacts onto a new platform.

Unlike Facebook or Twitter, many people don’t see a need to visit LinkedIn every day, Pachter noted. But in a world where no job is guaranteed forever, he added, “a lot of us value being on LinkedIn, just in case we need to be.”